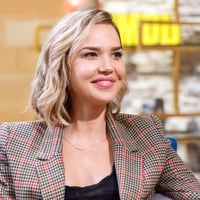 Arielle Kebbel Net Worth: Arielle Kebbel is an American model and actress who has a net worth of $3 million dollars. Arielle Kebbel was born in Winter Park, Florida in February 1985. She competed in the 2002 Miss Florida Teen USA pageant. She worked as a full time model and appeared in Maxim, Stuff, Men's Health, H, Lucky, and FHM. Kebbel moved to Los Angeles, California to pursue acting. In 2003 she appeared in the TV series CSI: Crime Scene Investigation and Judging Amy. From 2003 to 2004 Arielle starred as Lindsay in the TV series Gilmore Girls. Her film debut came in 2004's Soul Plane. In 2004 she starred as Taya in the series Grounded for Life. In 2020 Kebbel starred as Paige Thomas in the TV series Life Unexpected. From 2011 to 2013 she starred as Vanessa Shaw in 90210. Since 2009 she has had a recurring role as Lexi Branson on the series The Vampire Diaries. Kebbel has starred in the movies Be Cool, Dirty Deeds, American Pie Presents Band Camp, John Tucker Must Die, Aquamarine, The Grudge 2, The Uninvited, Vampires Suck, Mardi Gras: Spring Break, Think Like a Man, and Sweet Surrender. In 2007 she was nominated for a Teen Choice Award for The Grudge 2.