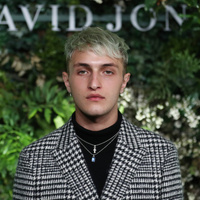 Anwar Hadid net worth and salary: Anwar Hadid is an American fashion model and television personality who has a net worth of $4 million. Anwar Hadid was born in Los Angeles, California in June 1999. He signed with IMG Models in 2016. Anwar Hadid is the son of Mohamed Hadid and Yolanda Hadid and is the brother of Gigi Hadid and Bella Hadid. His modeling debut came in Nylon Magazine in 2015 and he was on the cover of Teen Vogue in 2016. Anwar Hadid was named the face of Hugo Boss Menswear's HUGO line in 2017 and walked in the Zadig & Voltaire New York Fashion Week the same year. Hadid has appeared on the reality television series The Real Housewives of Beverly Hills. He has previously dated Nicola Peltz and began dating Dua Lipa in 2019. His mother Yolanda Hadid starred on The Real Housewives of Beverly Hills from seasons three through six.