Leo is an Argentine soccer player playing forward for FC Barcelona. He also serves as the captain of his country's national football team. Antonella Roccuzzo is not your typical "WAG" (wives and girlfriends of footballers). She and Messi have been a couple since 2008, and are rumored to be engaged. Antonella and Leo are childhood sweethearts. They have known each other since they were five-years old as Antonella is Messi's best friend's cousin Lucas Scaglia. The couple lives a jet setting lavish lifestyle in Barcelona but all reports are that Antonella does not exhibit any diva-like behavior. Antonella Roccuzzo gave birth to Leo Messi's first son, Thiago, in November 2012. FC Barcelona made the birth announcement on their team's website and father Leo was overcome with joy and said on his Facebook page "Today I am the happiest man in the world, my son was born and thanks to God for this gift!" 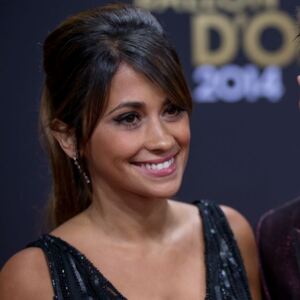