Angel Porrino Net Worth: Angel Porrino is an American actress, television personality, dancer, and showgirl who has a net worth of $600 thousand. Angel Porrino was born in Las Vegas, Nevada in May 1989. She is best known for starring in the reality TV show Holly's World and being Holly Madison's personal assistant and best friend.

Angel studied dance at gymnastics and was a cheerleader and student body president in high school. She met Holly Madison in 2007 when Angel tested for Playboy. She appeared on The Girls of the Playboy Mansion (or The Girls Next Door) from 2008 to 2009 as Holly's friend. From 2009 to 2011 Angel starred in Holly's World. Porrino and her son Roman live in Madison's Las Vegas house. Holly paid for Angel to undergo breast enhancement surgery for her 21st birthday. In 2010 Angel substituted for Holly in Peepshow at Planet Hollywood resort and Casino for a week. The producers signed Angel and she filled in for nine weeks in 2011 and then in 2012 while Madison was pregnant. In 2011 Angel starred in the show Absinthe at Caesars Palace in Las Vegas. In 2012 Angel appeared in the film The Atonement of Janis Drake. She has also starred in a music video by The Cab. 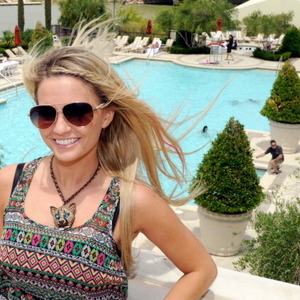