Ana Hickmann Net Worth: Ana Hickmann is a Brazilian model who has a net worth of $10 million. Ana Hickmann Correa was born in Santa Cruz do Sul, Rio Grande do Sul, Brazil in March 1981. Ana has worked for Nivea, L'Oreal, Victoria's Secret, Clairol, and Bloomingdales. Hickmann has been on the covers of Marie Claire, Elle, Brazilian Vogue, and in the South African version of the Sports Illustrated Swimsuit Issue.

She was listed in the Guinness Book of World Records for "The model with the longest legs" at 46.5″. Ana was listed in the Maxim Hot 100 Women in 2004 and 2005. In addition to modeling she manages a photography studio, DJ agency, and distributes her own clothes and cosmetics lines. Ana also co-hosts Programma da Tarde on the Rede Record TV network in Brazil. She has also served as magician's assistant to Mario Kamia. Ana married Alexander Correa in 1998 and gave birth to her first child Alexandre in 2014. Ana has blonde hair and blue eyes and is 6'1″ tall. 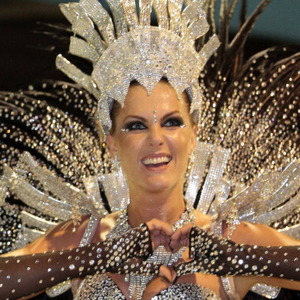