Amanda Marcum net worth and salary: Amanda Marcum Enfield is a former American model who has a net worth of $10 million dollars. Amanda Marcum Enfield was born in Mustang, Oklahoma, and has modeled for Maxim, Victoria's Secret, Tommy Hilfiger, and Armani, among many other high-profile fashion houses. She met college football coach, Andy Enfield, while she was modeling in New York.

He gave her a ride to an Oklahoma State basketball game that was being played in Boston. They were married six months later, and have since had three children. She no longer models, and is instead a stay-at-home Mom, with her family. She has been featured in multiple publications and broadcasts lately, as her husband's coaching career has become increasingly high profile. Amanda caused somewhat of a stir when Andy's team was playing in the NCAA March Madness tournament. Amanda turned heads every time the cameras showed her cheering for her husband form the stands with their children. 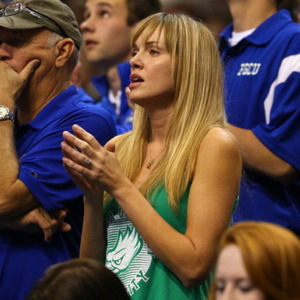