Alice Goodwin net worth: Alice Goodwin is a British glamour model who has a net worth of $1 million dollars. Born in Stoke-on-Trent, England, Alice Goodwin graduated from Newcastle-Under-Lyme School and then went on to attend Keele University. She was pursuing a degree in English and Education at Keele. While sunbathing on the beach one afternoon, she was approached by talent scouts from the Daily Star. Since then, she has appeared in multiple men's magazines, including Maxim, Nuts, and Zoo. In 2010, she began appearing on Elite TV, a televised sex chat channel. Readers of Zoo named her "Hottest Topless Babe of the Year", in 2009. She has been in and out of the headlines because of her relationship with football player Jermaine Pennant. He had an affair with Ms. Goodwin while he was engaged to someone else. After his fiancé broke off the relationship in 2011, Pennant and Goodwin took their relationship public. 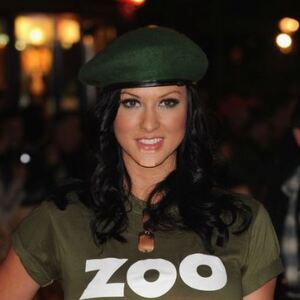