What is Ali Landry's Net Worth?

Ali Landry is a model, actress, and television personality who has a net worth of $6 million. Ali Landry rose to fame after being crowned Miss USA 1996. She became a superstar in 1998 after appearing in a Doritos commercial that aired during the Super Bowl. From that point on, Ali has also been commonly referred to as the "Doritos Girl," even decades later. Also in 1998, Ali was named as one of the 50 most beautiful people in the world by People Magazine.

As an actress, she is best known for her role as Rita Lefleur on the television sitcom "Eve." Landry has also hosted the hidden-camera reality series "Spy TV" and the entertainment news program "Hollywood Today Live," and has starred in a handful of films.

Ali Landry was born on July 21, 1973 in Cecilia, Louisiana to Renella and Gene. She was named after actress Ali MacGraw, whom her mother was fond of after seeing her in the film "Love Story." Landry is of French Cajun ancestry. As a teen, she went to Cecilia High School, where she was the cheerleading captain. After graduating in 1991, she attended the University of Southwestern Louisiana, now called the University of Louisiana at Lafayette. There, Landry studied mass communication.

Landry started her career in beauty pageants in 1990 when she won the title of Miss Louisiana Teen USA. She went on to represent her state in the Miss Teen USA pageant, where she came in seventh place overall. Landry's star rose further when she was crowned Miss Louisiana USA 1996, and then Miss USA 1996. Following this, she competed in the 1996 Miss Universe pageant, but was eliminated after the question round.

The year after winning Miss USA 1996, Landry began appearing on television. She was in episodes of the teen sitcom "Clueless," the action-adventure series "Conan the Adventurer," and the soap operas "Sunset Beach" and "The Bold and the Beautiful." From 1998 to 2000, Landry appeared in nine episodes of the syndicated naval action-adventure show "Pensacola: Wings of Gold." During this time, she was in episodes of "Popular," "Malcolm & Eddie," and "Felicity," and hosted Miss Universe 1999. In 2001, Landry hosted the music program "Farmclub.com" and appeared in an episode of the short-lived NBC sitcom "Inside Schwartz."

Landry had one of her biggest television gigs yet in 2002 when she hosted the second season of the NBC hidden-camera reality show "Spy TV." The next year, she was in two episodes of the Fox action-crime drama "Fastlane," and landed a main role on the UPN sitcom "Eve." On the latter series, which costarred Eve, Jason George, Brian Hooks, Sean Maguire, and Natalie Desselle-Reid, Landry played the role of Rita Lefleur, a former model. "Eve" ran for three seasons until its cancellation in 2006. Landry went on to appear in an episode of "Criminal Minds" in 2008. Her next major television gig was from 2016 to 2017, when she co-hosted the syndicated entertainment news program "Hollywood Today Live." Among her other television credits, Landry has appeared in episodes of "The Real Housewives of Beverly Hills" and the sitcom "Kevin Can Wait."

Landry made her feature film debut in 2000, playing Belindy Lindbrook in the Miss USA-themed dramedy "Beautiful," starring Minnie Driver and Hallie Kate Eisenberg. In 2002, she played the leading role of Kate Carson in the National Lampoon sex comedy "Repli-Kate." Next, she was in the direct-to-video comedy "Who's Your Daddy?," released in 2004. Two years after that, Landry acted in the drama "Bella," which was directed and co-written by her husband. She collaborated with her husband again in 2015 on his World War II drama "Little Boy," costarring Emily Watson, Jakob Salvati, Michael Rapaport, Cary-Hiroyuki Tagawa, and Tom Wilkinson, among others.

Among her other activities, Landry has hosted an interview show on Yahoo! entitled "Spotlight to Nightlight," on which she discusses parenting issues with various celebrity mothers. In 2009, Landry began her own lifestyle line called Belle Parish, which is inspired by her upbringing in the Southern United States. Beyond the worlds of entertainment and fashion, Landry is a passionate athlete, and has competed in the Boston Marathon.

When she was serving as a commentator for Miss Teen USA 1998, Landry met actor and television personality Mario Lopez, who was hosting the pageant. The pair began dating, and eventually married in 2004 in Mexico. However, the marriage was annulled just two weeks later after Landry found that Lopez had cheated on her during his bachelor party.

In 2006, Landry wed film director Alejandro Gómez Monteverde. The couple has two sons and a daughter. Both Landry's father-in-law and brother-in-law from the marriage were kidnapped and found murdered in Pueblo Viejo, Mexico in 2015. Six individuals were later arrested for the crimes.

In August of 2004, just two months after she ended her relationship with Mario Lopez, Ali paid $1.1 million or a home in LA's Los Feliz neighborhood. She listed the home for sale several times, starting in 2013. She re-listed it in 2016 for $2.4 million and finally accepted $1.95 million in July 2017. 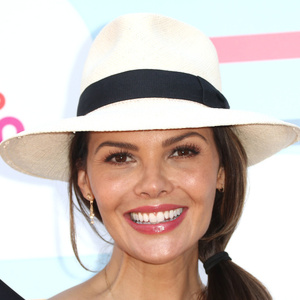