Agyness Deyn Net Worth: Agyness Deyn is an English fashion model, actress, and singer who has a net worth of $5 million. Agyness Deyn was born in Febuary of 1983 in Manchester, United Kingdom, though she grew up in Littleborough, a town near Rochdale, which is in the greater Manchester area.

In high school, she attended the All Saints Roman Catholic High School. Born as Laura Michelle Hollins, it's said she changed her name in order to further her modeling career. After getting her start in acting and making multiple successful appearances, including in that of Vogue, she began to take on singing. She helped sing Who by Five O'Clock Heroes, and can be heard in the background of Rihanna's We Found Love. Then in 2010, she began taking on acting roles, starting with Clash of the Titans. Additionally, she has worked as a designer, having created a shoes, accessories, and clothing line for Dr. Martens. She has also helped design a line of t-shirts for the clothing chain, Uniqlo. She collaborated with her sister on the project. In 2012, it was announced that Deyn had married American actor Giovanni Ribisi, who was eight years her senior. She was a stepmother to Ribisi's daughter, Lucia, whom he had with his first wife. Agyness and Giovanni divorced in 2015. The following year Agyness married Joel McAndrew. 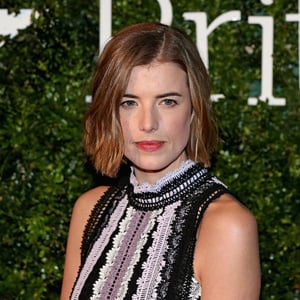