Mike Francesa Net Worth and salary: Mike Francesa is an American radio talk show host and television commentator who has a net worth of $16 million. Mike Francesa was born in Long Beach, New York in March 1954. He was well known for co-hosting the radio show "Mike and the Mad Dog" on WFAN in New York City which ran from 1989 until 2008.

He now hosts "Mike's On: Francesa on the FAN" in the same afternoon drive time slot. His career started at College and Pro Football Newsweekly. Mike was hired by CBS Sports in 1982 as a researcher. He became a studio analyst for college football and basketball and was nicknamed "Brent Musburger's brain". Francesa turned down an offer to work for ESPN in 1991. He quit CBS in 1993. The original run of Mike and the Mad Dog aired from September 1989 until August 2008. It featured Francesa and Christopher "Mad Dog" Russo talking sports and taking phone calls from listeners. Mike and the Mad Dog was one of the most popular sports radio shows of all time. The show was simulcast on the YES Network and around the country on various syndicated stations. In 2007, the show was the #1 show in the country for men between 25 and 54 years old. The duo won the 2000 Marconi Award for Major Market Personality of the Year. In 2005 they broadcast live for 25 straight hours to raise money for charities. In March 2014 Francesa's new show started broadcasting nationally on television on Fox Sports 1. He auditioned for Monday Night Football in 2000 but the job went to Dennis Miller. 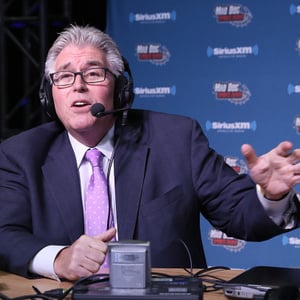