What is Meredith Vieira's Net Worth and Salary?

Meredith Vieira is an American television personality and broadcast journalist who has a net worth of $45 million. Meredith Vieira is most recognizable for her roles as moderator of the popular daytime talk show "The View" and then as co-host of "The Today Show."

How much did Meredith Vieira make per year hosting NBC's Today Show? At her peak, she earned an annual salary of $11 million.

Meredith Louise Vieira was born in Providence, Rhode Island on December 30th, 1953. Both of her parents are first generation Portuguese American. Her mother raised her and her three older brothers while her father worked as a medical doctor. Vieira means "scallop" in Portuguese, signaling her family's history that ties back to Faial Island. She attended a Quaker primary and high school in Providence. In her junior year of high school, Vieira scored a 1330 on the SAT, a very high score for that grade. After graduating she went to Tufts University. In 1975, she graduated magna cum laude with a bachelor's degree in English.

Vieira began her broadcast career in 1975 as a newscaster for radio station WORC in Worchester, Massachusetts. She worked her way up into having a larger role with television broadcasting, and in 1979, she got a job working as an investigative reporter in the newsroom at WCBS-TV in New York City. In 1982, she transferred to CBS and worked out of their Chicago office as a news reporter. She went on to be a correspondent of "West 57th" a specialty investigative news show on CBS from 1985 to 1989, and she hosted "60 Minutes" from 1989 until becoming pregnant with her second child in 1991. Prior to leaving the network in 1993, Vieira acted as co-host of the CBS Morning News, and then she left to join ABC as the chief correspondent of the news special program "Turning Point." While working for ABC, she became the host of the Lifetime biographical series "Intimate Portraits" and remained host until the show left air in 2004.

The View and Subsequent Work

In 1997, she was asked to act as moderator for ABC's new daytime talk show. Although the show has gone through a large number of hosts throughout the years, her role on the show has been a more consistent. As moderator, she gave the open and close for the show and introduced the topics that hosts would debate. She has stated that her role on "The View" came about because she was a reporter who didn't want to travel, which was a limiting factor on the jobs she was willing to take. She served as moderator until leaving the show in 2006 to work on the "Today Show".

Continuing to build on her career as a television host, Vieira became the first host and co-producer of the show "Who Wants to Be a Millionaire?" in 2002. During her time as host, she won two daytime Emmy awards in 2005 and 2009, making her the second woman in addition to Betty White to win an Emmy in the category of Outstanding Game Show Host. She hosted the show for eleven seasons until departing in 2013 to pursue other projects.

Both Vieira and co-host Matt Lauer were criticized for their bumbling and disjointed coverage of the opening ceremony at the 2012 London Olympics. In, 2013 she announced that she would begin hosting her own talk show that would air the following year. "The Meredith Vieira Show" began its run in the fall of 2014 and ended two years later with NBC citing a decline in ratings as the reason. 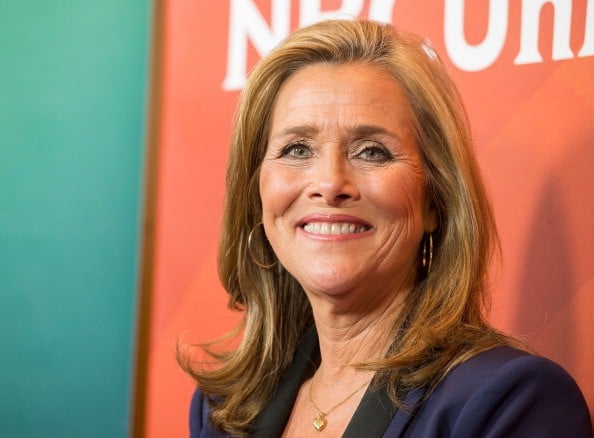 In addition to her television hosting, Vieira has acted in a number of feature films with the most notable being the 2010 hit "Shrek Forever After." Her first debut was in the popular 2004 film, "Stepford Wives," and in 2010, she appeared in the comedy "Get him to the Greek." She acted as co-host of PBS' weeklong coverage of Prince Harry's marriage to Meghan Markle in May of 2018. The next year she returned to daytime television as host of the Fox game show "25 Words or Less," in which contestants are paired with celebrities to guess a list of five words using twenty-five words or less as the title suggests. She has acted as herself in television shows including "30 Rock," "House of Cards," and "Orange is the New Black." She was a producer of the 2011 drama "The Return." Her other producer credit is of the documentary "The Woman Who Wasn't There," which is about a woman with a riveting 9/11 survival story who became head of a 9/11 charity organization until it was revealed that she was not even in New York at the time of the attack. The film received an Emmy nomination and was widely viewed.

While working at CBS, Vieira met journalist Richard M. Cohen, and the two married in June of 1986. Like his spouse, Cohen has a rich journalistic and television career, but he has suffered with numerous health issues. He has multiple sclerosis and overcame colon cancer two times in as many years. He won three Emmy's over the course of his career, and his last job was as senior producer for CNN and CBS News. They raised three children, and one, Gabe Cohen, followed his parents' footsteps and is a reporter based out of Washington state.

Meredith and Richard have a home in Westchester County, New York, a penthouse in New York City and a house in the Hollywood Hills in Los Angeles. They paid $8.5 million for their NYC penthouse back in December 2014. The 4-bedroom penthouse is located in the famed Eldorado building which has been home to celebrities like Alec Baldwin, Moby, Bruce Willis, Ron Howard and Michael J. Fox.

Their Westchester property, a 2.1-acre estate in the town of Irvington, New York, was acquired in 2000 for $2.1 million.