How much is Mel Kiper Worth?

Mel Kiper net worth: Mel Kiper is an American sports analyst who has a net worth of $7 million dollars. Mel Kiper, Jr. was born in July of 1960 and is best known for his work for ESPN, for which he has covered the NFL's draft every year since 1984. During the Draft, he provides in-depth coverage about both teams as well as the players who are being drafted. Kiper is said to have gotten his start when general manager for the Baltimore Colts, Ernie Accorsi, told him he should work toward becoming a sports analyst. At the time, he was already considered an expert, but hadn't considered turning that knowledge into a paying business. To date, he still works with Todd McShay, a fellow analyst, with whom he portrays mock drafts on various ESPN television shows. Each week, he also co-hosts a radio show called Dari and Mel with fellow announcer, Dari Nowkhah. Over the span of his career, Kiper has created a number of tactics that are still widely known, including the "Big Board," which is a literal board that he uses to rank players each week. Kiper's top 25 picks make the board. His voice has also been used on a number of video games, especially those that are NFL based. 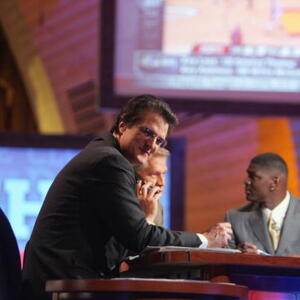