How much is Maya Angelou Worth?

Maya Angelou net worth: Maya Angelou was an American author, teacher, activist, poet and public speaker who had a net worth of $10 million. Maya Angelou was born Marguerite Ann Johnson on April 4, 1928 in St. Louis, Missouri. She is probably most famous for writing the book "I Know Why the Caged Bird Sings". The book quickly became an international best seller and is still standard reading material in many high schools. Early in life Maya marched with and was friends with both Dr. Martin Luther King, Jr and Malcolm X. During her career, Angelou was honored with hundreds of distinguished awards including 30 honorary degrees from various universities around the world, the Presidential Medal of Freedom, the National Medal of Arts in 2000 and three Grammys. Oprah Winfrey frequently described Maya as her mentor and idol. The two met while in the early 80s while Oprah was still working as a local news reporter in Baltimore. Maya famously read her poem "On The Pulse of Morning" at Bill Clinton's Presidential inauguration in 1993. Angelou died on May 28, 2014 at her home in Winston-Salem, North Carolina. She was 86 years old. When her agent announced Maya's passing, he explained that she had recently been frail and spent time in the hospital recovering from a mystery illness. 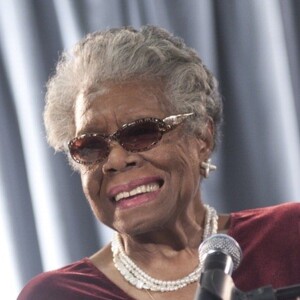