Masaharu Morimoto Net Worth: Masaharu Morimoto is a television personality and Japanese chef who has a net worth of $18 million dollars. Born May 26, 1955 in Hiroshima, Japan, he is best known as an Iron Chef on the Japanese TV cooking show Iron Chef as well as its spinoff Iron Chef America.

Morimoto is known for his unique style in food presentation. Morimoto received his practical training in sushi and traditional Kaiseki cuisine in Hiroshima and opened his own restaurant in Hiroshima in 1980. He sold the restaurant in 1985 to travel the United States and expand his interest in western cooking styles. He established himself in New York City working at some of Manhattan's high profile restaurants and held positions of executive chef (Sony Club) and head chef (Nobu). Several months after the end of his run with The Iron Chef (1999), Morimoto opened his own restaurant once again, in Philadelphia, Pennsylvania this time. He now has a Morimoto restaurant in Chelsea in New York City. He also went on to develop a line of specialty beers and opened two more restaurants in Napa Valley, California and Waikiki, Hawaii. In April 2011, Morimoto made his acting debut on Hawaii Five-O (episode entitled Ma Ke Kahakai), playing himself. In 2013, he opened the Asian fusion restaurant Bisutoro in New York's Tribeca neighborhood. 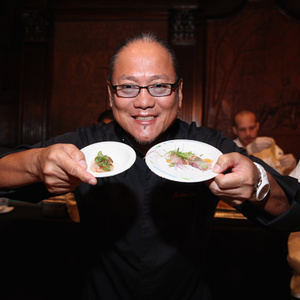