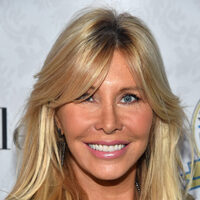 Lisa Gastineau net worth: Lisa Gastineau is an American television personality and entrepreneur who has a net worth of $30 million dollars. Lisa D'Amico Gastineau was born in Rockland County, New York in December 1959. She is a 3rd generation native of New York. She was discovered as a teen and became a model. She went to the University of Alabama and studied broadcasting and communications. When she was 19 Lisa met New York Jets football player Mark Gastineau. The two got married in 1979. Lisa and Mark separated in 1986 when she found out that he was having an affair with the actress Brigitte Nielsen. Mark and Nielsen were engaged but never married. Lisa and Mark divorced in 1991. Lisa worked as an entertainment correspondent for Fox's "Good Day New York". She has been a buyer and proprietor of high end designer fashion, jewelry, and accessories. Lisa and her daughter Brittny were featured on the E! reality show The Gastineau Girls in 2005 and 2006. She has appeared on EXTRA, Entertainment Tonight, The View, Oprah, and Keeping up with the Kardashians. Lisa is the president and designer of Tres Glam fine jewelry and designs and appears on HSN as part of Gastineau Glamour.