Leland Chapman Net Worth: Leland Chapman is an American bounty hunter, bail bondsman and TV personality who has a net worth of $2 million. Born in Groom, Texas, in 1976, Leland Chapman is the son of Duane Chapman, better known as Dog the Bounty Hunter, and his first wife. Chapman joined a gang as a teenager while living with his mother and was eventually sent away to live with his father.

When he was 17, he began training in MMA and boxing until a knee injury forced him into retirement. He joined his dad's bail bonds company with Duane's current wife, Beth, and several other family members, including his half-sister "Baby" Lyssa. The family starred on "Dog the Bounty Hunter", which ran for eight seasons on A&E before entering syndication. In 2006, he and his father were arrested and facing extradition to Mexico on charges stemming from an incident when they chased accused serial rapist Andrew Luster across the border. The Mexican government later dropped the charges. Chapman and his brothers are founders of the company Chapbros Media. He quit "Dog the Bounty Hunter" on an episode in 2012 and now owns his own bail bonds company and runs his father's business. Chapman is married to his wife, Diane, and has three children. 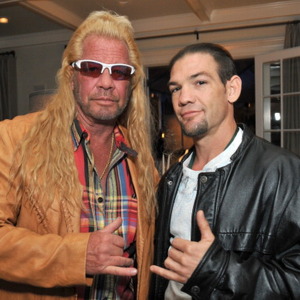