Laura Ingraham Net Worth and Salary: Laura Ingraham is a radio host, political commentator, and best-selling author with a net worth of $40 million. Laura Ingraham is best known for her role as a correspondent and host on the Fox News Channel. Although she began her career in politics, she later gravitated towards news and became the host of her own show. Laura Ingraham also has a legal background.

Early Life: Laura Anne Ingraham was born on June 19th of 1963 in Glastonbury, Connecticut. She grew up in this small town, which has a population of about 35,000 today. She graduated from Glastonbury High School in 1981 before relocating to Hanover, New Hampshire to attend Dartmouth College. She earned her B.A. at this Ivy League research university, graduating in 1985. While attending Dartmouth, Laura Ingraham wrote for and managed The Dartmouth Review, a conservative student paper.

Career: Laura Ingraham first worked for the Reagan administration in the late 80s as a speechwriter. During this time, she also continued to earn her stripes in the news world while working as an editor for The Prospect, another conservative student publication.

Not long afterwards, Laura Ingraham returned to school – this time to study law. She attended the University of Virginia School of Law, graduating in 1991 with a Juris Doctor. After obtaining this qualification, she worked in the U.S. Court of Appeals as a law clerk. She then became a clerk for the U.S. Supreme Court under Justice Clarence Thomas. After gaining this valuable experience, Laura Ingraham became an attorney for an international law firm based in New York City. During this period, Ingraham was still gaining a reputation as one of the most promising young conservatives in America.

In 1996, Laura Ingraham landed her first hosting job for MSNBC. Towards the end of the decade, she moved to CBS to host the program Watch It! Because of her conservative stance, it seemed like Fox News was the best fit for the outspoken host. In 2008, she would finally join forces with Fox, landing a new job as the host for This Just In. The job was a trial run, and Ingraham would eventually graduate to a much more prominent role in 2017 when she started hosting The Ingraham Angle. In terms of viewers, The Ingraham Angle is the third-highest cable news program on television. In terms of its specific slot, The Ingraham Angle is number one.

Prior to her work with Fox News, Laura Ingraham started hosting her own radio show called The Laura Ingraham Show in 2001. After eventually settling with the Talk Radio Network, Ingraham's radio show ultimately became the fifth-most-popular in America according to Talkers Magazine. In 2012, Ingraham ditched the Talk Radio Network and relocated to Courtside Entertainment Group. In 2018, her show finally went off the air, although she continues to create content for her podcast.

Other Ventures: In 2015, Laura Ingraham co-founded a conservative website called LifeZette. The site's White House correspondent was the first to be called upon during Sean Spicer's press conference directly after the inauguration of President Trump. In 2018, Ingraham sold her majority stake in the website to Canadian billionaire Daryl Katz for an undisclosed fee.

Controversy: Ingraham is no stranger to controversy. Laura Ingraham has been accused of being anti-homosexual by a number of individuals, most notably her brother, who is gay. Ingraham herself explains that she supports civil unions between same-sex partners, but opposes same-sex marriage.

Laura Ingraham is also very much opposed to uncontrolled immigration and has supported Trump's conservative, populist stance on the issue. Ingraham has also criticized Trump for not being strong enough on issues relating to immigration. She has expressed fears that America is losing its national identity due to excessive immigration.

Laura Ingraham is also known for her attacks against various celebrities for speaking their mind about political issues. According to her, these people have no business spreading their opinions and recommendations, as they have no political experience of their own. Indeed, she often tells these celebrities to "shut up and act," "shut up and dribble," or "shut up and coach."

Relationships: Laura Ingraham has never been married, although there are rumors that she has dated various celebrities over the past. These may include James V. Reyes and Robert Torricelli.

Personal Life: Although Laura Ingraham was raised as a Baptist, she later converted to Roman Catholicism. Ingraham is a keen student of languages, having studied both Spanish and Russian over the years. Although Ingraham has no biological children of her own, she has three adopted children, which she has raised alone as a single mother. Her children are from other nations such as Guatemala and Russia.

Cancer Diagnosis: In 2005, Laura Ingraham was diagnosed with breast cancer. She has stated that she and her doctors detected the cancer early and that chemotherapy was successful. However, Ingraham lost her hair due to the ordeal. Her diagnosis came just six years after her mother passed away from lung cancer.

Salary: Fox News pays Laura Ingraham a salary of $15 million per year. This is one of this highest salaries among Fox News hosts, and just to put it in perspective, Tucker Carlson only earns $8 million per year – a full 7 million less than Ingraham.

Real Estate: Records show that in 2014, Laura Ingraham purchased a property in McLean, Virginia for $1.6 million. The 7,869-square-foot property sits on 2.1 acres of land and features a pool and a spacious patio. In 2020, the property was valued at $3.3 million. 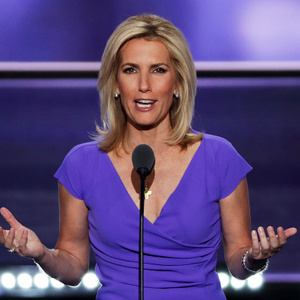