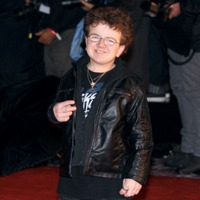 Keenan Cahill is a popular teenage American web star who has a net worth of $425 thousand. Keenan Cahill has earned his net worth from his lip-syncing of popular songs, and his successful YouTube channel. Cahill has had some very special guests appear in his videos including; rapper 50 Cent in November 2010, David Guetta in January 2011 and Jersey Shore's Paul DelVecchio in February 2011. He was born in Elmhurst, Illinois on March 8, 1995; he was diagnosed with Maroteaux-Lamy syndrome from which he has developed a dwarf-like appearance. Cahill performed in a video for the Zulu Awards in March 2011, at the Danish award show he lip-synched all the songs that were nominated for the Hit of the Year award. He appeared with two San Francisco Giants stars Brian Wilson and Cody Ross in April 2011, the duo performed the popular hit "Dynamite" by Taio Cruz. Later in June of 2011 Cahill performed the song "Party Rock Anthem" alongside LMFAO, then in July 2011 Cahill was nominated for a Teen Choice Award for Choice Web Star, also that same month Tinie Tempah appeared in one of Cahill's videos. Katy Perry and Keenan performed Teenage Dream together in a video; in August 2011 Cody Simpson made a guest appearance in one of Cahill's videos. Still in August Cahill and The Miz a WWE Superstar has a battle, this war of words happened on the Social Media site known as Twitter. The two faced off in a "lip-sync battle" with the chosen song being The Miz's WWE entrance theme ("I Came To Play" by Downstait). As of September 2011, Keenan has a pending nomination for Viral Web Star at the J-14 Awards. He launched his first clothing brand "Just Love Apparel" created around his "hearts" symbol he uses in his videos, in June 2011. He wore a shirt from this collection during his appearance on America's Got Talent on August 10, 2011.