Katie Cassidy net worth: Katie Cassidy is an American actress who has a net worth of $3 million. Katie Cassidy was born Katherine Evelyn Anita Cassidy in Los Angeles, California in November 1986. Her father is David Cassidy of The Partridge Family. Katie was named after the famous actress Katharine Hepburn.

Her first role was in the TV series The Division in 2003. She had recurring roles in 7th Heaven, Sex, Love & Secrets, and Supernatural. Cassidy starred in Harper's Island and Melrose Place in the late 2000s. From 2010 to 2012 she starred in Gossip Girl and from 2012 to 2014 she starred as Laurel in the series Arrow. Cassidy has also appeared in the films When a Stranger Calls, Black Christmas, Taken, A Nightmare on Elm Street, and Monte Carlo. She serves as a spokesperson for the H.E.L.P. Malawi charity. She has been nominated for Teen Choice Awards in 2010 and 2013. She has modeled for Abercrombie and Fitch. When she was 15 Katie recorded a cover of her father's hit "I Think I Love You". She has dated Jesse McCartney, Jarret Stoll, and Jerry Ferrara. 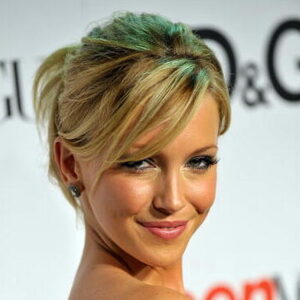