Karl Wolf net worth: Karl Wolf is a Lebanese-Canadian musician who has a net worth of $16 million dollars. Karl Wolf was born Carl Abou Samah in Beirut, Lebanon in April 1979. He and his family moved to Dubai, UAE when he was three. His parents were both musicians. In 1985 he immigrated to Canada at 17 years old.

He started out writing and co-producing music and was a backup singer for Dubmatique. Wolf co-wrote songs for Gabrielle Destroismaisons and won a Felix Award for Best Mix and Sound of the Year. Wolf became the new lead singer of the Canadian band Sky in 2002. He co-wrote and co-produced the band's third album Picture Perfect. The album was the best-selling record in Canada in 2003. It won Wolf a SOCAN Award for Most Popular Song. Karl was featured on the Canadian reality show Star Academie. He went solo in 2005 and released his debut studio album Face Behind the Face in 2006. He has released a total of four studio albums. Wolf's 2009 single "Africa" was certified 4x Platinum and hit #2 on the Canadian Hot 100 chart. His other popular songs include "Carerra", "Yalla Habibi", Ghetto Love", and "Mash It Up" / "Fuck Shit Up". He has won an MTV Europe Music Award and a Canadian Radio Music Award. He also manages new artists through his company Lone Wolf Management. 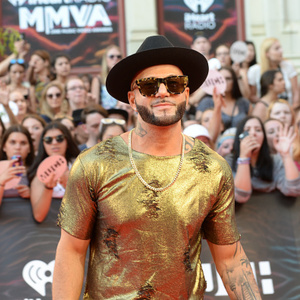