Joshua Bell net worth: Joshua Bell is an American violinist and conductor who has a net worth of $15 million dollars. Joshua David Bell was born in Bloomington, Indiana in December 1967. At four he started taking violin lessons. Joshua took rubber bands and stretched them out to play music. As a child he studied under Donna Bricht, Mimi Zweig, and Josef Gingold.

At 12 Joshua started to get serious about playing the violin and at 14 he appeared as a soloist with the Philadelphia Orchestra. Bell studied at the Indiana University Jacobs School of Music and received an Artist Diploma in Violin Performance. In his home state Bell has received the Indiana Governor's Arts Award and been named an Indiana Living Legend. At 17 he debuted at Carnegie Hall with the St. Louis Symphony Orchestra. He won a Grammy Award in 1993. He plays a 300 year old violin that he purchased for almost $4 million. He received the Avery Fisher Prize in 2007 and also joined the faculty at his alma matter as a senior lecturer. In 2011 he became the Music Director of the Academy of St Martin in the Fields. His 2007 experiment for the Washington Post earned him a Pulitzer Prize and national attention. He posed as a street performer in Washington D.C. During this experiment few stopped to listen to him and he earned barely over $30 in tips. He has three children and three sisters. 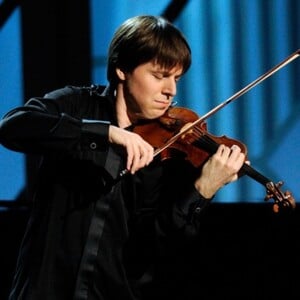