How much is Jocelyn Wildenstein Worth?

Jocelyn Wildenstein Net Worth: Jocelyn Wildenstein is a New York socialite who at one point was rumored to have a net worth of $500 million dollars. Today we actually estimate her net worth to be $10 million. In May 2018, Jocelyn Wildenstein filed for bankruptcy listing $16 million in assets  and $6 million worth of debt. She claimed that her only income is a $900 social security payment and therefore she has fallen way behind on her $4.5 million mortgage. This is eyebrow-raising if you believe reports about Jocelyn's divorce settlement. According to many reports, when Jocelyn divorced from her husband Alec in 1999, she reportedly received a settlement that included a lump sum of as much as $2.5 billion plus $100 million per year in support payments. Today we here at Celebrity Net Worth have concluded that these stories were all blown way way way out of proportion. According to our sources, it's likely that Jocelyn Wildenstein received significantly less than $50 million total and today struggles to afford her basic lifestyle. Born August 5, 1940 in Lausanne, Switzerland, she is known for her extensive facial surgeries and an extravagant lifestyle consisting of $60,000/year phone bills and annual food and wine costs in excess of $545,000. The dis-figuration which has emerged from the series of surgeries, causing Jocelyn to resemble a feline, earned her the nickname Catwoman. Jocelyn married billionaire French businessman Alec Wildenstein when they were both in the their 30s. They divorced in 1999. Jocelyn claims that Alec loved big cats and that she had the multiple surgeries to please him—that she got exactly what she wanted out of the surgeries and that she felt beautiful when she looked into the mirror. The couple's divorce was highly publicized and was not amicable, as Jocelyn walked in on her husband and a 19-year-old model in her bedroom at the Wildenstein's New York home and he threatened her with a gun. Alec Wildenstein was jailed over the incident. During the divorce proceedings, the judge stipulated that Jocelyn was not to use any alimony payments for further cosmetic surgery. 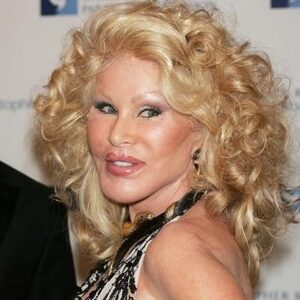