Jo de la Rosa net worth: Jo de la Rosa is an American reality TV star who has a net worth of $100 thousand dollars. Born in Lima, Peru, Jo de la Rosa moved to the United States when she was three years old. She grew up in Tustin, California, but subsequently moved to the wealthier community of Mission Viejo, after her parents won the lottery in the early 90s. She graduated from Mission Viejo High School and then from the University of California-Irvine, where she majored in English and Comparative Literature. After college, she began working as part of a title insurance firm. She moved in with Slade Smiley, another insurance executive, who was quite wealthy. Soon after this, she became a cast member on the first season of "The Real Housewives of Orange County". She had trouble being a state-at-home mother, however, and moved to Los Angeles to pursue her insurance career once again. The move ended her relationship with Mr. Smiley, and she only appeared on "The Real Housewives" in the finale episodes of Seasons 3 & 4. She launched a recording career in 2008, and also appeared on a spin-off dating series called "Date My Ex: Jo and Slade". 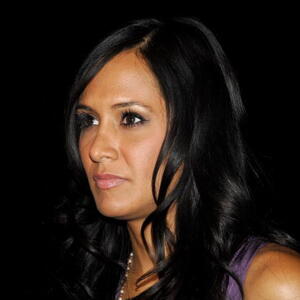