Jim Nantz Net Worth and salary: Jim Nantz is an American sportscaster who has a net worth of $15 million dollars. Jim Nantz was born May 17, 1959, in Charlotte, North Carolina. He has worked on telecasts of the NFL, NCAA, men's basketball and the PGA Tour for CBS Sports since the '90s. Nantz has also been the NFL announcer on CBS's top play-by-play since 2004. He attended the University of Houston in Texas, where he majored in broadcasting and played on the Houston Cougars men's golf team, where he also roomed with future professional golfers Fred Couples and Blaine McCallister. It was during this time that Nantz got his first experience in sports broadcasting with the CBS Radio Network, transmitting taped interviews to Win Elliot for the latter's Sports Central USA weekend reports. Before becoming a permanent fixture for CBS sports, Nantz worked for a time as an anchor and sportscaster for KSL TV in Salt Lake City. Nantz won the Emmy Award for Outstanding Sports Personality, Play-by-Play in both 2008 and 2009. He has been honored with the NSSA's National Sportscaster of the Year award five times (1998, 2005, 2007, 2008, 2009). In 2011, Nantz was named as a recipient of the Pete Rozelle Radio-Television Award from the Pro Football Hall of Fame. He received an honorary Doctor of Humane Letters from the University of Houston in 2001. He is also one of the youngest recipients of the Basketball Hall of Fame's Curt Gowdy award for broadcasting. Nantz was awarded the Ambassador Award of Excellence by the LA Sports & Entertainment Commission in 2012 for his involvement in the community. 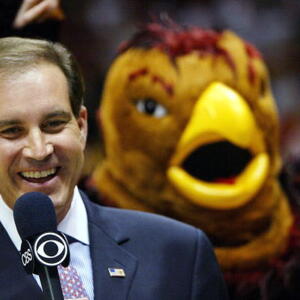