Jenelle Evans net worth: Jenelle Evans is an American reality television personality who has a net worth of $30 thousand dollars. Janelle Evans was born on December 19 1991 in Oak Island, North Carolina and was cast in the second season of the MTV reality series, "16 and Pregnant". She lived with her mother and her mother's boyfriend throughout her pregnancy and after giving birth. She subsequently broke up with her boyfriend after he ran into trouble with the law and was arrested. In early 2011, she joined the cast of "Teen Mom 2", which follows the lives of the cast members of the second season of "16 and Pregnant", as they raise their children and go out into the workforce. She has a reputation for being a "party girl". During her time on "Teen Mom 2", she and her new boyfriend were arrested. Evans has been arrested a number of times. Her criminal record included arrests for breaking and entering, drug possession, and assault. She is a notorious partier, drinker, and has run away from home before. In June 2012, she received breast implants. Currently, her mother has custody of her son Jace. Jenelle married Courtland Rogers in December 2012 and soon after she suffered a miscarriage when she alleged Courtland assaulted her. She filed for divorce. She entered rehab in March 2013. After rehab she began dating Nathan Griffith. The couple announced Jenelle was pregnant again in December 2013. 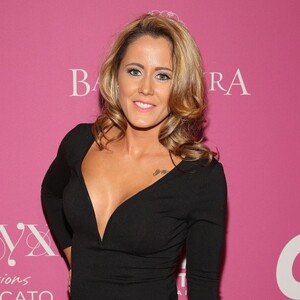