How much is Janine Lindemulder Worth?

Born in La Mirada, California, in 1968, Janine Lindemulder got her start as a "Penthouse" model in the late '80s. A year later, she scored her first part in an Italian movie alongside "The Exorcist" star Linda Blair. She had several other small parts in movies before landing the opportunity to appear in the video "Penthouse Satin & Lace", which soon led to her career in the adult industry Her first adult film appearance came in 1992's "Hidden Obsessions" and she was soon part of the Vivid Girls, only acting in explicit scenes with other women. She made at least 50 adult films with Vivid Video while also working as an exotic dancer.

Lindemulder was featured in the Howard Stern film "Private Parts" and routinely appeared on his shows. She retired from the industry in 1999 to become a kindergarten teacher, but returned five years later and signed with her former company to star in films with both men and women. She co-starred with Jenna Jameson in 2007's "Janine Loves Jenna" and won two AVN Awards a year earlier.

Janine was involved in accidentally released homemade sex tapes with Vince Neil of Motley Crue. In 2002, Lindemulder married Jesse James on an episode of "Motorcycle Mania 3". They had one child and divorced two years later. She has faced a litany of legal troubles, including accusations of assaulting her ex and failure to pay taxes. She served four months in a federal prison on tax charges. 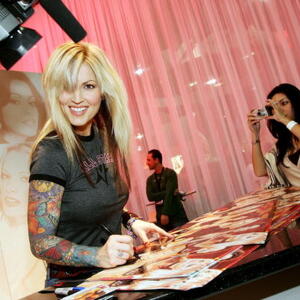