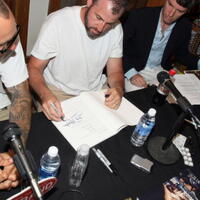 Controversial author James Frey has accumulated a net worth of $4.5 million over his career. And he's achieved this net worth despite being widely considered a fabulist, after his supposed autobiography A Million Little Pieces was revealed to be largely fabricated. Frey's career began in show business, getting two of his screenplays produced in 1998: Kissing a Fool and Sugar: The Fall of the West. The latter film was also directed by Frey. In 2003, the aforementioned "autobiography" A Million Little Pieces was published to much acclaim, receiving a "Book of the Year" designation from Amazon.com. After more success in the publishing world, the investigative website The Smoking Gun published "A Million Little Lies: Exposing James Frey's Fiction Addiction" which documented the many inconsistencies with the truth that could be found in Frey's book. This caused a firestorm of controversy, with Frey asserting that while small details in the book had been embellished or changed to protect the identities of those involved, the "reality of his addiction" was all factually accurate. The controversy eventually led to a live interview between Frey and one of the book's early champions Oprah Winfrey, in which he both admitted to and was called to task for his deception.