Jackie Mason net worth and salary: Jackie Mason was an American comedian, actor and producer who had a net worth of $9 million at the time of his death. He is considered one of the greatest stand-up comedians of all time. Jackie Mason died on July 24, 2021 at the age of 90.

Jackie Mason was born on June 9, 1931 in Wisconsin. His career in comedy began at the age of 25 after he resigned from his position as an ordained rabbi in order to become a comedian. His comedy career has been largely on the stage, appearing in many one-man shows, including Politically Incorrect, which has been very successful for Mason on the road. Even in his later years, Mason has found the time and energy to star in feature films.

Despite being what many consider a generally benign comedian, Mason was not been free from controversy. Several incidents he's been involved with include everything from flipping off Ed Sullivan (he denied doing this, and Sullivan later apologized for misunderstanding a gesture of Mason's) to controversial comments involving Israel (Mason was an ardent supporter of Israel) and Barack Obama. Still, with a career in entertainment that spans The Simpsons, The Jerk, and Caddyshack II, it's likely that Jackie Mason will be remembered first and foremost as a comedian. 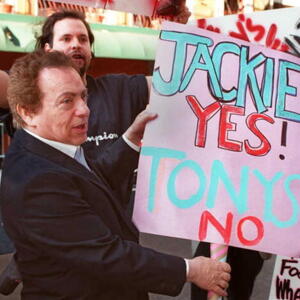