Haifa Wehbe Net Worth: Haifa Wehbe is a Lebanese singer and actress who rose to fame in the Arab world as a competitor in the Miss Lebanon pageant. Haifa Wehbe has a net worth of $65 million. Haifa Wehbe was born March 10, 1969 in Mahrouna, Lebanon, a small farming town. Wehbe won the title of Miss South Lebanon at the age of sixteen and was a runner-up at the Miss Lebanon competition.

She released her debut album Houwa in 2002. She is known through her music for her beauty, showmanship, sex appeal, provocative mannerisms, and image. She has released six studio albums and she made her acting debut in 2008 in the film "Sea of Stars". Wehbe is one of the most notable singers in the Arab World and is considered one of the most successful Lebanese singers. In 2006, she was on People Magazine's 50 most beautiful people list. Wehbe was ranked 8th in the 2006 Edition of the Top 99 Most Desirable Women by the website AskMen.com. Wehbe was also ranked number 2 in the AskMen.com's 10 Hottest Arab Women article. She has also appeared in the films "Dokkan Shehata" and "Halawet Rouh" as well as the reality television show "Al Wadi" based on the French reality show "La Ferme Célébrité". 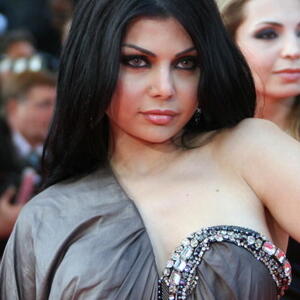