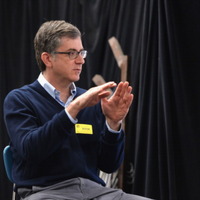 Greg Daniels Net Worth: Gregory Martin "Greg" Daniels is an American writer, producer, and director who has a net worth of $50 million. He is famous for writing episodes for four of Time´s reviewer James Poniewozik all-time 100 TV Shows: "The Simpsons", "Saturday Night Live", "The Office" and "King of the Hill". Born in Brooklyn, New York on June 13, 1963, Daniels states that he was only 11 when he first felt inclined to comedy after reading books by humorist S.J. Perelman and watching "Monty Python´s Flying Circus". He made his career beginnings as a Harvard student as he wrote for the Harvard Lampoon with Conan O'Brien. Upon his graduation in 1984, he and O'brien both took jobs at "Not Necessarily the News", but were soon fired due to budget cuts. In 1993, Daniels joined the writing staff of the Simpsons, where he got a chance to work from the fifth to the seventh season of the show. He even earned a Primetime Emmy Award for the Simpsons' episode "Treehouse of Horror V" of the seventh season. Daniels left the Simpsons to co-create King of the Hill along with Mike Judge. In 2005, Daniels made an American adaptation of the BBC documentary series "The Office", which was pretty successful after its second season. The series earned him an award for Outstanding Writing for a Comedy Series at the 59th Annual Primetime Emmy Awards. After the success of "The Office" Daniels switched to writing for "Parks and Recreation" until he made a full-time comeback to "The Office", working on its last two seasons. Daniels is married to Susanne Dari Liebersterin, whom he met on the "Saturday Night Live" set. The couple has four kids: Maya, Charlotte, Haley, and Owen.