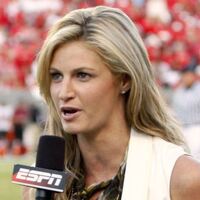 What is Erin Andrews' Net Worth and Salary?

Erin Andrews is an American sportscaster who has a net worth of $30 million. Andrews is also famous for hosting "Dancing with the Stars" and for acting as a contributor for "Good Morning America." Over the course of her career, Erin has worked for networks such as ESPN and Fox Sports, participating in the coverage of major sporting events like the Super Bowl and the World Series. In the eyes of some publications, she is "America's Sexiest Sportscaster." Andrews made headlines in 2009 when a nude video of her was published online without her permission.

Erin Jill Andrews was born on May 4th of 1978 in Lewiston, Maine. Her father is Steven Andrews, a six-time Emmy Award-winner and a TV journalist. Her mother is a school teacher. At the age of five, Erin moved with her family to San Antonio, Texas, where her father was pursuing work as an investigative reporter for an NBC affiliate. Andrews has stated that she was a tomboy while growing up and that her whole life revolved around sports. From a young age, she was watching NBA games with her father, and she looked up to female sportscasters of that era, such as Hannah Storm, Melissa Stark, and Suzy Kolber.

Erin Andrews then moved to Valrico, Florida, where she attended high school. She was heavily involved in extracurricular activities as a high school student, joining the dance team, the student government, and the National Honor Society.  Outside of her classes, she attended a separate dance school. She also continued to be obsessed with sports, to the point where most of her friends were boys because they were the only ones who wanted to talk about the subject.

After graduating from high school in 1996, Erin Andrews attended the University of Florida. She studied Telecommunication, graduating with a Bachelor of Arts degree in 2000. During her college days, she once again joined the dance team and was a member of a sorority.

Andrews started her career with Fox News Florida in 2000. In 2004, she started working for ESPN. After covering a wide range of sporting events, Erin gained considerable notoriety, and she was invited to appear on a range of talk shows. She also participated in the tenth season of "Dancing with the Stars," placing third. In 2012, she left ESPN to join FOX Sports, and she covered sporting events in the same capacity as before. In 2014, she started acting as co-host for "Dancing with the Stars," a position she held until 2020.

For her role as a sideline reporter for Fox NFL, Erin Andrews earns a salary of about $2 million per year. 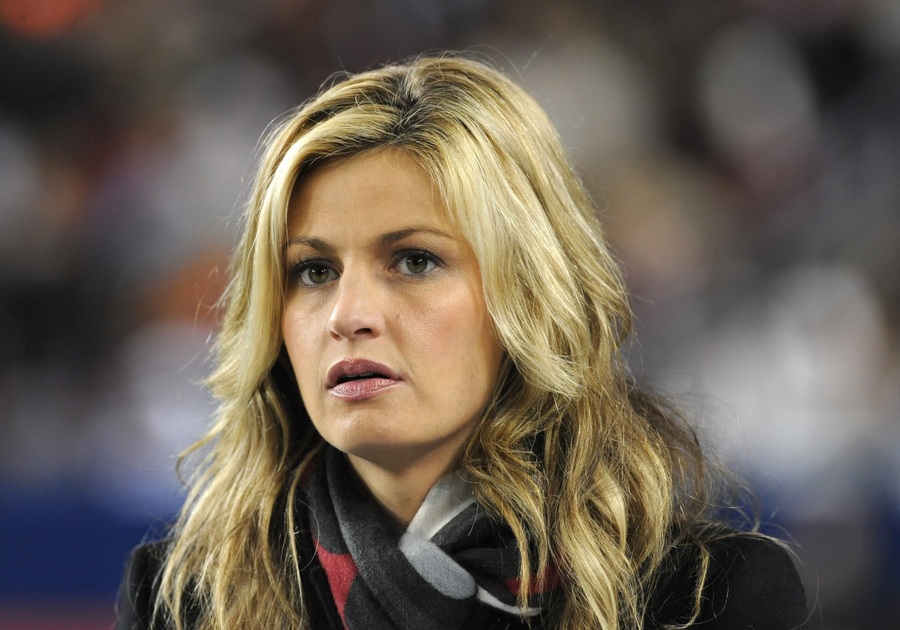 Erin Andrews has partnered with a number of brands over the course of her career, often with charitable projects. In 2010, she teamed up with Kraft Foods in their Huddle to Fight Hunger campaign. Next year, she collaborated with the online ticket sales giant StubHub to create their "Girls Night Out" campaign. This project aimed to encourage women to show their love of sports, and it awarded a group of women with free tickets intermittently. The organization also helped raise funds for the Tragedy Assistance Program for Survivors.

In 2011, she helped promote Reebok's ZigTech brand. In 2014, Erin Andrews became the new face of the cosmetics company CoverGirl. She also helped promote its #Gameface campaign, which was a viral social media campaign that awarded women with free sports tickets. In 2016, Andrews became a brand ambassador for Orangetheory Fitness. In 2019, she worked with sportswear company Fanatics to create her own clothing line.

In 2012, Erin Andrews started dating hockey player Jarret Stoll. The pair became engaged in 2016, and in 2017 they were married. As of 2020, they live in Los Angeles together and take care of a golden retriever.

In 2017, Andrews announced that she had been diagnosed with cervical cancer back in 2016. Although she had to undergo two surgical procedures, she eventually recovered completely. Because of this health scare, she and Jarret Stoll considered having children much earlier than they originally intended, and reports stated that they were exploring options for in vitro fertilization.

After her struggle with cancer, Andrews partnered with diagnostics company Hologic to promote the We Can Change campaign. The campaign encourages women to go get annual exams and remain vigilant against cancer.

In 2008, a stalker named Michael David Barrett managed to find out which hotels Erin Andrews was staying at, and he subsequently booked rooms adjacent to hers. The man then filmed Andrews inside of her hotel room using peepholes at the Nashville Marriott and the Radisson Airport Hotel in Milwaukee. In 2009, Barrett published one of these videos on the internet, which shows Erin Andrews completely nude.

The video went viral and caused considerable issues for Erin. She later stated that the incident triggered a case of depression and that she was constantly harassed by those who had seen the video. According to Andrews, people sent screenshots from the video to her personal Twitter account and screamed abuse at her in person.

In 2009, the FBI arrested Michael David Barrett on charges of interstate stalking. He pleaded guilty and was charged to two and a half years in prison, three years of probation, and about $12,000 in fines and restitution. When the FBI apprehended Barrett, they found another nude video of Andrews on his computer. Fortunately, that file was never published on the internet.

However, Andrews wasn't finished just yet. She decided to sue Barrett, Marriott International, Radisson Hotels, and five other entities for their part in the breach of privacy. She claimed that the hotels had been negligent, as employees must have provided Barrett with her room number and the dates of her stay. The legal battle continued throughout the next few years, but in 2015, Andrews was finally awarded $55 million in damages. As of 2019, Erin Andrews was still trying to have the nude video removed from the internet.