Doyle Brunson Net Worth: Doyle Brunson is an American professional poker player who has a net worth of $75 million dollars. Born in Longworth, Texas, in 1933, Doyle Brunson has been a pro poker star for more than 50 years. He grew up in a town with about 100 people and was an All-State Texas basketball player.

He enrolled in Hardin-Simmons University and was set to join the Minneapolis Lakers when a knee injury torpedoed his career. After getting hurt, he became more serious about polishing his poker skills, and earned one month's salary in a game his first day on the job after his college graduation. It didn't take long for Brunson to quit the sales industry and focus on poker full-time. He and his friend joined dozens of illegal games put together by organized crime before traveling to Vegas for the first time and losing everything. After that, Brunson split off from his friend and pursued a solo-playing career. He has appeared in the World Series of Poker nearly every year of its existence. He has won two WSOP championships and ten WSOP bracelets. Brunson is the author of "Super/System", an expert guide to poker, which he self-published in 1978. In the mid-2000s, he updated the book and published it as "Super/System 2", with contributions from other pros such as David Sklansky, Chip Reese, and Bobby Baldwin. There are two Texas hold'em hands named in honor of Brunson: a ten and two of any suit and an ace and queen of any suit. He was the subject of an investigation by the Securities and Exchange Commission, though action was dropped in 2007. Brunson has been married to his wife, Louise, since 1962. When she was pregnant, doctors discovered a tumor in Brunson's neck and deemed it terminal. When Brunson underwent surgery to stay alive long enough to see his child's birth, doctors found no cancer, and have called it miraculous.

Louise had a similar experience with a tumor of her own, and their daughter's scoliosis healed within three months. Brunson's daughter died of potassium overdose when she was 18 and his son is also a professional poker player. 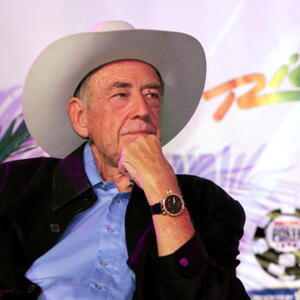