What is Tyler Perry's net worth and Salary?

Tyler Perry is an American actor, director, playwright and producer who has a net worth of $800 million. Tyler Perry is, far and away, one of the most financially successful directors in the entertainment industry. Over the course of his career, he has directed and produced more than 30 movies, 20 stage productions, and eight TV shows. Every year, he personally earns between $200 and $250 million from his sprawling entertainment empire. His production company currently earns $150 million per year from one deal alone with ViacomCBS.

Tyler is a truly self-made tycoon. He built his empire from scratch starting with a single play he wrote and produced called I Know I've Been Changed. While living in his car, Tyler parlayed that play into a mini theater empire that eventually grew into today's enormous multi-media empire. Tyler owns 100% of his costs, revenues and profits.

Perry was born Emmitt Perry, Jr., on September 13, 1969 in New Orleans, Louisiana. He did not complete high school, but earned a GED. After suffering abuse at the hands of several family members during his younger years, Tyler began writing as a way to help heal his mental wounds. During his early 20s, an episode of The Oprah Winfrey Show, which described the positive and therapeutic impact writing can have on a person, inspired him to pursue a career in the field.

Writing proved to be a beneficial escape for Perry. He went on to write himself a series of letters that later became the jumping off point for the musical I Know I've Been Changed. This, as well as his other stage productions, quickly gained a fan following throughout Atlanta and beyond, peaking at more than 35,000 audience members per week.

Jumping off his home-grown success, Perry approached production studio Lionsgate with a proposal. Perry would put up half the money for an upcoming film that would need a $5.5 million budget. Lionsgate put up the other half and took a small fee for marketing a 12% fee for distribution. They would split the profits after those costs evenly. Their first movie under this arrangement was 2005's Diary of a Mad Black Woman. The film grossed $50.6 million domestically and eventually earned an additional $150 million from TV syndication and home video sales. As part of his Lionsgate deal, Perry owns the content and keeps half the profits.

Perry's directorial debut came in 2006 with his second film, Madea's Family Reunion, which opened at number one at the box office with $30.3 million. The film ultimately grossed $65 million. (And he has directed each of the succeeding Madea films.)

Tyler produced 14 "Madea" movies. Those films grossed nearly $700 million dollars at the box office. Each film cost less than $10 million to make. Since Perry writes, directs and produces all of his movies almost entirely independently, he is able to take home the lion's share of each of his film's profits. A lion's share of roughly $300 million.

Perry's films are typically targeted towards an African American audience and they often include subtle nods to Christianity.

Perry's popular sitcom, Tyler Perry's House of Payne, ran for eight seasons—from June 21, 2006, to August 10, 2012. The show initially aired on CW and generated unexpected enormous ratings for the fledgling network. TBS lured Perry and Payne away from CW by offering him a $200 million production guarantee plus a 90 episode commitment. Oh, and Tyler would own the show. Tyler famously only spent $60 million on production costs. He kept the remaining $140 million for himself.

He also wrote, directed and produced Meet the Browns, which premiered on TBS in January 2009 and came to an end on November 18, 2011. 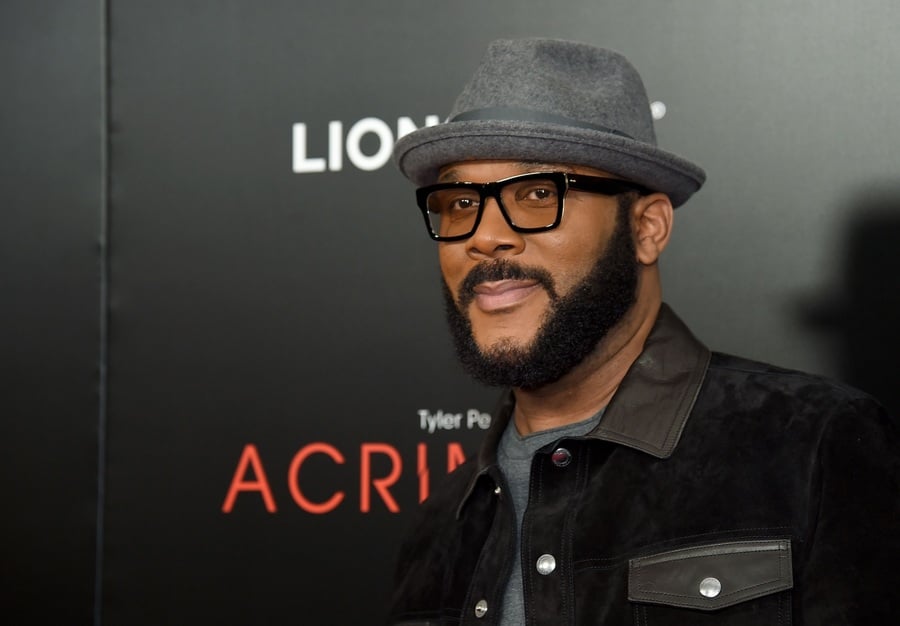 In 2019, Perry finally unveiled Tyler Perry Studios' new home, which is situated on the 330-acre former military base Fort McPherson that he had purchased four years earlier. During the civil war it was a Confederate military base. Perry paid $30 million for the real estate then spent $250 million on upgrades and renovations.

The Walking Dead has been filmed on the lot. Approximately 50,000 square-feet of the studio lot is dedicated to permanent sets including a perfect replica of the White House, a trailer park, a luxury hotel and 16,000 square-foot mansion. The blockbuster Marvel movie Black Panther was the first movie filmed on the lot.

It is one of the largest studios in the world and rendered Tyler the first African-American to own a major studio. In a given year, other studios like Netflix and Amazon spent $100 million renting the studio's facilities for their productions.

As part of a deal struck with ViacomCBS that pays Tyler Perry Studios $150 million per year for content production, Tyler personally received an equity stake in the BET+ streaming network. Today that stake is worth an estimated $50 million.

Perry legally changed his first name at the age of 16 in order to distance himself from his abusive father, Emmitt Perry, Sr. However, years later, a DNA test revealed that Emmitt Sr. was not Perry's biological father.

Although unmarried, Perry has been in a relationship with model and social activist Gelila Bekele since 2009. In November 2014, Bekele gave birth to their son Aman Tyler Perry.

Outside of television and film, Perry supports a number of charitable causes and frequently lends resources to those in need. For example, in 2009, Perry sponsored 65 children from a Philadelphia day camp to visit Walt Disney World.

The Writers Guild of America, West filed unfair labor practice charges with the National Labor Relations Board, alleging that Tyler Perry Studios unlawfully fired four writers in October 2008 in retaliation of their attempt to get a union contract. The dispute was settled a month later. 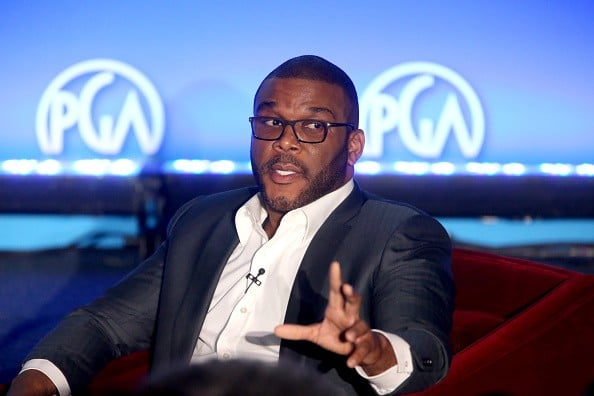 Perry spends the majority of his time in Atlanta, where—at press time—he is building a sprawling new residence not far from the Tyler Perry Studios headquarters. He reportedly has plans to turn a portion of property into an organic farm. (In May 2016, Perry sold the 35,000-square-foot Atlanta mansion he had lived in for nine years for $17.5 million.)

Perry is also the owner of a 14,000-square-foot residence on 20 acres on the island of White Bay Cay in the Bahamas. He reportedly paid $6.4 million for the property in 2009.

In 2018, Perry parted ways with a 10-bedroom home in Los Angeles's Mulholland Estates that he had bought just nine months earlier for $14.5 million. He sold the residence for $15.6 million to rapper and songwriter Pharrell Williams.

He still owns another home in Los Angeles, located within the uber-exclusive gated community called the Beverly Ridge Estates. Perry custom built what became a 25,000 square-foot mansion on the 22.5-acre property. In May 2020 it was revealed that Prince Harry and Meghan Markle were renting the home as they made a new life in Los Angeles. Based on similar nearby sales, this house is worth north of $20 million.

Tyler owns a Gulfstream III private jet that reportedly cost $125 million to acquire and customize. The jet features a screening room with 42-inch LCD flat screen and satellite hookup. He spent at least $50 million on customizations and furnishing for the formal living room, kitchen and VIP bedroom. He has used the jet on a number of occasions to philanthropic missions, delivering supplies to countries recently-hit by tragedies. He owns a second similar private jet.

Tyler Perry: How To Be Successful

In 2012 Tyler posted a video to YouTube in which he answered the question he is asked most frequently: "How did you make it?!" Here is his reply:

"There is only one answer to that… Truth be told, it was nothing but the grace of God. Nothing but the grace of God. You can plant seeds all day long. You can go around giving your business card out to people. You can go around knocking on doors and auditioning. You can do all of that every day of your life and nothing happens. When a seed is planted in the ground, all you can do is water it. You cannot control the sunshine. You cannot control the weather and you cannot control whether the locusts come and try to destroy it. All you can do is plant your seed in the ground, water it and believe. That is what allowed me to be in this position right now. I would not stop believing. I planted my seed. I worked really hard. I had one idea and that was to do a play… My only idea. My only focus was to do one play. And I knew if I could get that to work everything else would come to pass. There are so many people who go in so many directions. This week there going to do this. Next week they're going to do that. And next week they're going to be in real estate. The next week they're gonna open a salon. Those kind of people are all over the place and I usually try to get them to just focus on one thing. Focus on one area… Focus on one thing. Make it your priority and stick with it no matter what…" -Tyler Perry 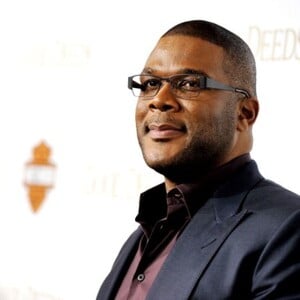