How much is Steven Spielberg Worth?

Steven Spielberg net worth: Steven Spielberg is an American director, screenwriter and producer who has a net worth of $3.7 billion and annual salary of $150 million. Steven Spielberg's name is synonymous with film and his career spans over four decades. Spielberg had humble beginnings when he was just a boy with a huge imagination and a dream. Steven Spielberg was born on December 18th 1946, in Cincinnati, Ohio. His mother Leah Adherer was a concert pianist and his father Arnold Spielberg was an electrical engineer involved in the development of computers. Steven's childhood was spent in Haddon Heights, New Jersey and Scottsdale, Arizona. It was in Scottsdale, as a teenager, where a young Spielberg would create 8mm short films. Even back then Spielberg had the gall to charge 25 cents for the local kids to come and watch his many epics.

At the age of 13, Spielberg won an award for his 40 minute film about war called "Escape to Nowhere". At the age of sixteen he made his first feature length film, "Firelight", which he played at his local cinema. It was a Sci-fi film which would later go on to inspire the classic "Close Encounters of the third kind". Unfortunately, his parents eventually divorced and he moved with his father to Saratoga, California where Steven attended and graduated from Saratoga high school. After graduation he applied to University of Southern California School of Theater, Film, and Television but was rejected three times. Instead he attended California State University, Long Beach.

His career did not begin until he worked at Universal Studios as an unpaid intern for the editing department. It was during this time that Spielberg directed a twenty-four minute short film, "Amblin" (a name that he would eventually carry to his production company) which caught the eye of Sidney Shainberg who was the vice president of production for Universal's television division. Spielberg became the youngest director to ever sign a long-term contract with a major studio. He dropped out of college for the opportunity.

During his time as a television director he directed episodes of Rod Sterling's Night Gallery, Columbo, and Marcus Welby M.D. These ventures we're so successful that he was signed on to shoot four made-for-television films. The first of which was the 1971 classic "Duel". Duel was such a success that he was offered the job of directing the theatrical feature film "The Sugarland Express". The film was met with a lot of positive feedback.

It was not until 1975 when Spielberg's career sky-rocketed with the success of "Jaws". In 1975 Jaws became the first real blockbuster film after over 67% of Americans went to see it. He would follow it up with "Close Encounters of the Third Kind" starring Richard Dreyfus (who Spielberg considers his alter ego). In 1981 he teamed up with long time friend and fellow filmmaker George Lucas to create Indiana Jones which was an even bigger hit. By this time Spielberg was becoming a master of big Hollywood films creating such masterpieces as E.T and Indiana Jones. His career would continue to create more hits such as Hook, Jurassic Park, and Minority Report. In addition to the box office acclaim he has also seen critical acclaim and awards. Spielberg has won three Academy awards, two of them for directing (Schindler's List and Saving Private Ryan) and one for Best picture (Schindler's List). Furthermore, he has been part of the productions of "Back to the future", "Poltergeist', "Animaniacs", "Gremlins", and "The Goonies".

In 1985, Spielberg and his first wife actress Amy Irvine had their son Max Samuel Spielberg together. The couple would divorce in 1989. He got remarried in 1991 to actress Kate Capshaw. The two live in four different locations around the world (Pacific Palisades, Ca, New York City, Naples Florida, and the East Hamptons) with their seven children. He continues to make direct, produce, and breathe films. 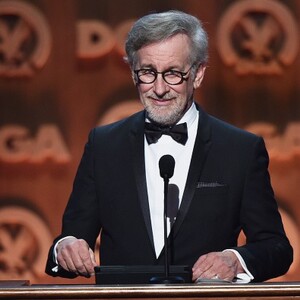