What is Sofia Coppola's net worth?

Sofia Coppola is an American actress, director, producer, and screenwriter who has a net worth of $40 million. Sofia Coppola earned her net worth through her screenwriting, producing and directing, as well as sometimes appearing in films and television series.

Sofia Carmina Coppola was born in New York City, NY on May 14, 1971. She is the daughter of director Francis Ford Coppola. Her first cousins are Nicolas Cage and Jason Schwartzman. She was raised in Rutherford, California, and graduated St. Helena High School in 1989. During high school, she had an internship at Chanel. She dropped out of college and started her own clothing line called Milkfed, which is now sold exclusively in Japan.

Starting as a baby, Sofia appeared in seven of Francis Ford's films. She appeared in all three parts of the "Godfather" trilogy. In "Godfather Part III," she replaced the originally-cast actor Winona Ryder after she became unavailable. It has been suggested that Coppola's heavily criticized performance in "The Godfather III" damaged Francis Ford Coppola's career. Sofia was named "Worst Supporting Actress" and "Worst New Star" at the 1990 Golden Raspberry Awards for her performance. She was also in "The Outsiders" in a background scene in 1983, "Rumble Fish" that same year, "The Cotton Club" in 1984, and "Peggy Sue Got Married." Sofia's first film that her father was not part of was Frankenweenie in 1984. For that film, she adopted the stage name Domino.

Although she officially ended her acting career after the "Godfather III" debacle, she did appear in several music videos for The Black Crowes, Sonic Youth, Madonna, and The Chemical Brothers, and she made a background appearance in "Star Wars Episode 1: The Phantom Menace" in 1999. Coppola has expressed that she never intended or desired to be in front of the camera. 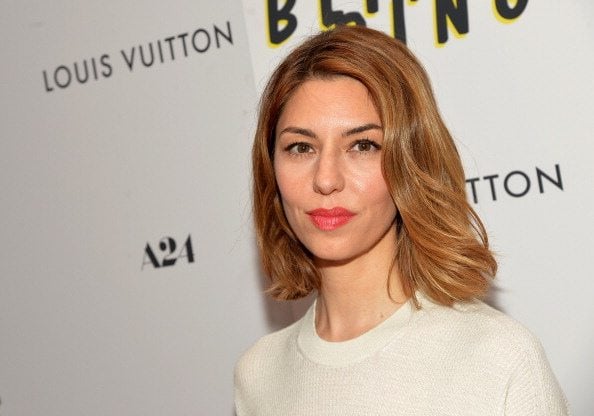 Coppola's feature film directing debut came in 1999 with the critically acclaimed "The Virgin Suicides". She was drawn to the story after reading the book by Jeffrey Eugenides, and was hesitant to direct the film but felt so connected to the material she felt the need to create it.  Her father refused to help her secure the rights to the novel, therefore she adapted it herself. The film immediately put her on the map as a filmmaker and marked the point at which the public stopped attributing Coppola's father as the reason for her place in the spotlight.

Her second film was 2003's "Lost in Translation" starring Bill Murray and Scarlett Johansson, for which she won the Oscar for original screenplay and three Golden Globes. Her desire to shoot at the Park Hyatt Hotel in Tokyo is what inspired her to bring the film to life. She had a low budget and a quick time frame of 27 days. The film was challenging to make; they worked with a small crew working without permits and scenes were filmed impromptu in the streets, and they were only permitted to film in the hotel corridors between 2 a.m. and 3 a.m, so as not to disturb guests. The iconic scene from the movie of the umbrella-carrying crowds at Shibuya Crossing was not staged or planned whatsoever–it was snagged during a random outing for coffee. Coppola had Bill Muray in mind as she wrote the screenplay, but it took her several tries to get him to sign on for the role.

Her third film found her working once again with Kirsten Dunst in the biopic "Marie Antoinette" in 2006. Although critics were divided, the film did well at the box office and received a standing ovation at the 2006 Cannes Film Festival. Her next films were 2010's "Somewhere", which won the prestigious Golden Lion at the Venice Film Festival and 2013's "The Bling Ring." Coppola collaborated again with Bill Murray on "A Very Murray Christmas," an homage to classic Christmas-themed variety shows and was released on Netflix in December 2015. In 2017, Coppola once again worked with Kirsten Dunst on a remake of the Southern Gothic film "The Beguiled." Coppola became the first American woman to win the Best Director award at the Cannes Film Festival for her work. In October 2020, she released the comedy-drama "On the Rocks" starring Rashida Jones and frequent collaborator Bill Murray.

Coppola did some modeling in the early nineties for teen-oriented magazines such as Seventeen and YM. Coppola and her best friend Zoe Cassavetes helmed the short-lived TV series "Hi Octane" on Comedy Central in the mid-nineties, but the show was canceled after just four episodes. In December 2008, Coppola released her first commercial, for Christian Dior fragrance, which premiered during an episode of "Gossip Girl." In 2014, Coppola launched a series of Christmas ads for Gap. In 2017, Coppola directed her first stage production, "La Traviata." The production was filmed for broadcast in Germany and France.

Sofia Coppola met director Spike Jonze in 1992. The couple married in 1999 and got divorced in 2003. It is widely believed that the main character's husband in "Lost in Translation" was written based on Jonze.

Coppola married musician Thomas Mars in August 2011. They had met years earlier while producing the soundtrack for "The Virgin Suicides." The couple has two daughters, Romy, whose name is a tribute to Coppola's brother Roman, born in 2006, and Cosima, born in 2010. The family lived in Paris for several years before moving to New York City in 2010. She has long maintained a low public profile for her family and aims for her children to be kept out of the spotlight, unlike her own upbringing.