Roberto Benigni Net Worth: Roberto Benigni is an Italian actor, comedian, screenwriter, and director who has a net worth of $15 million. Robert Benigni was born in Manciano La Misericordia, Castiglion Fiorentino, Italy in October 1952. He first acted in 1971 and acted and directed experimental theater shows in Rome. Benigni directed and starred in the films You Upset Me, Nothing Left To Do But Cry, The Little Devil, Johnny Toothpick, The Monster, Life Is Beautiful, Pinocchio, and The Tiger and the Snow.

He also starred in the films Il minestrone, Down by Law, Son of the Pink Panther, The Monster, Asterix and Obelix vs Caesar, Coffee and Cigarettes, and The Tiger and the Snow. For Life is Beautiful Benigni won 12 Best Actor Awards including an Academy Award, BAFTA Award, and Screen Actors Guild Award. He also won 26 screenplay and directing awards for the film including an Academy Award and Cesar Award. For Pinocchio he won a Razzie Award for Worst Actor and was nominated for three other Razzies including Worst Director. He also won Best Actor awards for Il Minestrone, Down by Law, The Little Devil, Johnny Stecchino, and The Monster. 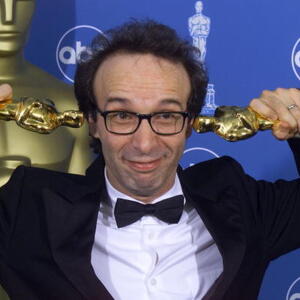