Matt Stonie net worth: Matt Stonie is an American competitive eater and YouTube personality who has a net worth of $3 million. In 2015 he won the Nathan's Hot Dog Eating Contest after dethroning the eight time defending winner Joey Chestnut. Soon after Stonie achieved the rank of #3 in Major League Eating.

Matt Stonie was born in San Francisco, California in May 1992. He first competed in Major League Eating in a Deep Fried Asparagus Championship in 2011 after winning a lobster roll eating contest in 2010. Stonie's first YouTube video was uploaded in 2012 when he drank a gallon of Gatorade in 37 seconds. He now has more than 14 million subscribers with his most viewed video has been watched more than 110 million times. His channel has roughly 3 billion total views as of this writing. 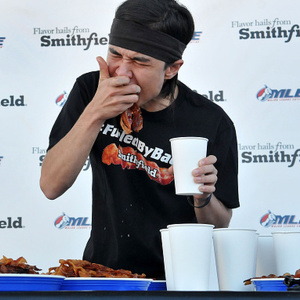