M. Night Shyamalan Net Worth and Salary: M. Night Shyamalan is an Indian-American director, screenwriter, producer, and filmmaker who has a net worth of $80 million. Shyamalan is best known for directing thrillers with interesting plot twists, and these films have earned a cumulative sum of over $3 billion over the years. After starting his career in the early 90s, he rose to prominence with films like "The Sixth Sense." Since then, Shyamalan has directed a number of notable films, although not all have been financially successful. Outside of directing, Shyamalan is also an actor, producer, and screenwriter with a number of additional credits on a range of projects.

Early Life: Manoj Nelliyattu Shyamalan was born on August 6th of 1970 in Mahé, Pondicherry, India. Raised by parents who were both doctors, Manoj emigrated with his family to the United States when he was just six weeks old. He was then brought up in Penn Valley, Pennsylvania, where he attended a Roman Catholic grammar school despite being raised as a Hindu. From a very early age, Manoj was passionate about filmmaking. At the age of 17, the young teen had created 45 home movies.

After completing secondary school, Shyamalan attended New York University on a Merit Scholarship in 1988. Although his father wanted Manoj to follow in the footsteps of his family and become a doctor, his mother recognized and encouraged his passion for filmmaking. While attending the Tisch School of the Arts at New York University, Manoj adopted the stylized "M. Night" prefix as a professional name. He eventually graduated in 1992.

Career: M. Night's first major film was the 1992 independent film "Praying with Anger," which he produced while studying at college. His next film, "Wide Awake," saw a wider release, although it grossed just $305,704 on a $6 million budget. After gaining writing credits for films like "Stuart Little" and "She's All That," Shyamalan's major breakthrough came with 1999's "The Sixth Sense." A monumental success, the film grossed over $672 million to become the second-highest-grossing horror film at the time. "The Sixth Sense" was also nominated for a number of awards.

Continuing with his early success, M. Night released films like "Unbreakable," "Signs," and "The Village" over the next few years. These were all box office successes and were well-received by critics. However, his fortunes changed in 2006 with the release of "Lady in the Water." This film was seen as a critical and financial failure. Unfortunately, he didn't fare much better with his next two films: "The Happening" and "Avatar: The Last Airbender," and the latter of which won five Razzie Awards.

2010's "Devil" performed better, although Shyamalan's confidence was shattered by previous failures during this period. Major Hollywood studios had also lost faith in the director. However, he was able to bounce back with "The Visit" in 2015, a film that became one of the highest-grossing thrillers of the year with box office earnings of $98 million. He reached even greater heights with his next film, "Split," which grossed over $278 million.

In 2019, "Glass" managed to rake in over $245 million at the box office. Outside of filmmaking, M. Night Shyamalan has worked on series such as Apple TV's "Servant," and "Wayward Pines." He also owns his own production company called Blinding Edge Pictures.

Relationships: M. Night Shyamalan has been married for many years to Dr. Bhavna Vaswani. The couple originally met while studying together at New York University. Over the course of their relationship, Shyamalan and Vaswani have had three children.

Controversy: In 2004, Shyamalan essentially orchestrated a widespread media hoax through Sci-Fi Channel. He worked with several staff members to spread a false story that he had been dead for 30 minutes after drowning as a child, only to be resuscitated. This false narrative also spread the idea that because of this near-death experience, Shyamalan had been given the ability to communicate with spirits.

This hoax was quite complex, and staff members were asked by Shyamalan's representatives to sign strict non-disclosure agreements throughout the entire process. Those who violated this NDA were threatened with a $5 million fine. When the false nature of this narrative was eventually revealed, Shyamalan was widely-condemned. NBC (Sci-Fi's parent company) issued a statement and apologized for "offending the public and the press."

In addition, M. Night has been accused of plagiarism on multiple occasions. Many writers and observers have pointed out strong similarities between many of the director's films and earlier works. For example, the film "Signs" displays notable similarities to an unpublished script called "Lord of the Barrens: The Jersey Devil." An author called Margaret Peterson Haddix wrote a book called "Running Out of Time" in 1996, which she claims is extremely similar to the film "The Village."

In addition, Orson Scott Card has pointed out that his novel "Lost Boys" bears a striking resemblance to the film "The Sixth Sense." None of these authors have ever successfully filed a lawsuit against Shyamalan for copyright infringement, as they have generally accepted that M. Night changed enough details to make such lawsuits a waste of time.

Real Estate: In 2005, Shyamalan purchased a 125-acre estate called "Ravenwood" in the countryside west of Philadelphia for $17.9 million. A red-brick Georgian Revival house sits on the property, constructed from brick. Shyamalan and his wife then sought help from Richard Cameron, a home designer who specializes in historically influenced renovations. This resulted in the couple adding 12,000 square feet to the already existing 15,000 square feet of living space before the renovations. They constructed an entirely new, two-story, 17th-century inspired gatehouse.

In 2007, the director faced legal action after constructing an 8-foot deer fence around his sprawling Philadelphia estate. Local residents complained that the mesh fence was "unsightly" and that it blocked their view. However, a judge later allowed him to keep this fence, and Shyamalan was able to protect his recently-created formal gardens from deer.

In 2012, M. Night reportedly sold a penthouse in Manhattan for $9.5 million. He had originally listed the residence a year prior for $16 million before heavily discounting the price in an effort to sell. Shyamalan originally purchased the property back in 2003 for $6.3 million. One of the penthouse's most endearing features is a floating limestone staircase with bronze custom-sculpted railings. 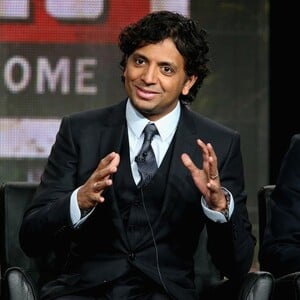