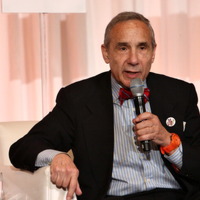 Lloyd Kaufman net worth: Lloyd Kaufman is an American producer, director, screenwriter and actor who has a net worth of $5 million dollars. Born in New York City on December 30, 1945, Kaufman is best known for co-founding Troma Entertainment. He has been active in the industry since 1969 and is a close collaborator to fellow co-founder, Michael Herz. He attended Yale University and majored in Chinese Studies. His interest in film was birthed from his close friendship with Robert Edelstein and Eric Sherman. Kaufman briefly worked for the Peace Corps before directing his first feature film, The Girl Who Returned. After collaborating on several smaller films, Kaufman went on to create Troma Entertainment with Herz in 1974. Kaufman did some side work for Rocky, Saturday Night Fever, and The Final Countdown in order to make ends meet while establishing his own brand in the industry. Troma is best known for the dark comedy, The Toxic Avenger, which also had two sequels. Despite The Toxic Avenger's success, Troma collapsed under lack of sales and went on to pursue solely independent film production. Kaufman is currently married to Pat Swinney Kaufman, and the couple have three daughters.