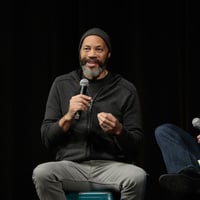 John Ridley net worth: John Ridley is an American writer and director who has a net worth of $5 million dollars. John Ridley was born in Milwaukee, Wisconsin, and went on to study East Asian Languages and Culture at New York University. He began writing for television in the early 90s, and went on to write episodes for such shows as "Martin", "The Fresh Prince of Bel-Air", "The John Laroquette Show", "Trinity", "Platinum", "3rd Watch", "Barbershop", and "The Wanda Sykes Show". He has published seven novels, some of which have been turned in to films, including "Stray Dogs", "The Drift", and "Those Who Walk in Darkness". He is most widely recognized as a screenwriter, and wrote scripts, or the story, for such films as "U Turn", "Undercover Brother", "Three Kings", "Red Tails", and most recently, "12 Years a Slave". His script adaptation of "12 Years a Slave", won the Oscar for Best Adapted Screenplay, among multiple other honors.