What Is John Lasseter's Net Worth?

John Lasseter is an American animator, film director, screenwriter, and producer who has a net worth of $100 million. Lasseter runs Skydance Animation, and he previously served as the chief creative officer at Walt Disney Animation Studios, Pixar Animation Studios, and Disneytoon Studios. He was also Walt Disney Imagineering's Principal Creative Advisor. John has directed the Pixar films "Toy Story"(1995), "Toy Story 2" (1999), "A Bug's Life" (1998), "Cars" (2006), and "Cars 2" (2011), and he has produced more than 100 projects, including "Toy Story 3" (2010), "Frozen" (2013), "Zootopia" (2016), "Finding Dory" (2016), and "Incredibles 2" (2018), which each grossed over $1 billion. Lasseter took a leave of absence from Disney in November 2017 after he was accused of sexual misconduct toward employees. In June 2018, Disney announced that John would "assume a consulting role at The Walt Disney Company until December 31, 2018, at which time he will be leaving the company." In January 2019, he was hired by Skydance Animation, becoming the head of the company.

John Lasseter was born John Alan Lasseter on January 12, 1957, in Hollywood, California. His father, Paul, worked as a parts manager at a car dealership, and his mother, Jewell, was a high school art teacher. John and his fraternal twin, Johanna, grew up in Whittier, California, and he became interested in animation at a young age, thanks to his mother's profession. After reading the Bob Thomas book "The Art of Animation," Lasseter realized that he wanted a career in animation. In 1975, he enrolled at the California Institute of the Arts and was only the second student to sign up for the school's new Character Animation program, which was created by two Disney animators, T. Hee and Jack Hannah. The program was taught by veteran Disney animators Eric Larson, Ollie Johnston, and Frank Thomas. During his time in the CalArts Character Animation program, John produced the shorts "Lady and the Lamp" (1979) and "Nitemare" (1980), which both won Student Academy Awards for Animation. During summer breaks, Lasseter worked at the Walt Disney Company and took a job as a skipper on the Jungle Cruise.

After Lasseter graduated from CalArts, he was hired as an animator at Walt Disney Productions. In the early '80s, he saw some videos from computer-graphics conferences that got him excited about the future of computer animation, and he later worked on a computer animated short test film of "Where the Wild Things Are" with Glen Keane. Their direct superiors weren't happy about this and canceled the project, then told Lasseter, "Well, John, your project is now complete, so your employment with the Disney Studios is now terminated." He later worked freelance for Lucasfilm Computer Graphics Group's Ed Catmull on the company's first computer animated short, "The Adventures of André & Wally B." In October 1984, Lasseter became a full-time employee at Lucasfilm, and he later worked on the special effects for "Young Sherlock Holmes" with Industrial Light & Magic (ILM), creating the first-ever "fully computer-generated photorealistic animated character." Lasseter and Catmull went on to make the first computer-animated feature film, 1995's "Toy Story." After George Lucas' divorce, he sold Lucasfilm Computer Graphics, which was known as Pixar Graphics Group by that time. Pixar became a separate corporation in 1986, and Apple co-founder Steve Jobs was the majority shareholder. While he was with the company, Lasseter oversaw every Pixar film as an executive producer. 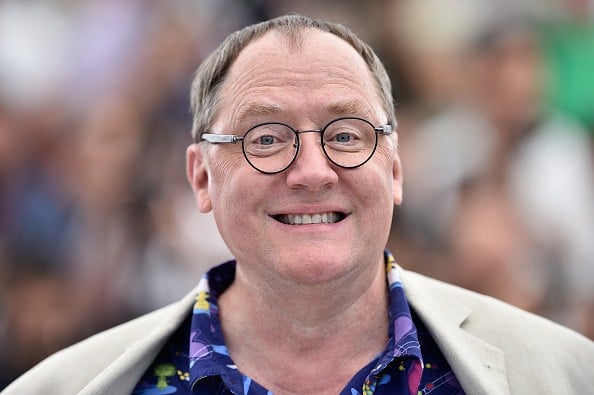 Disney purchased Pixar in 2006 and named John the chief creative officer of Walt Disney Feature Animation (which he later renamed Walt Disney Animation Studios) and Pixar. He also became the principal creative adviser for Walt Disney Imagineering and helped design Disney theme park attractions. Lasseter executive produced every film Walt Disney Animation Studios made from 2006 to 2018. Lasseter and Catmull began running Disneytoon Studios in June 2007. John is friends with Japanese animator Hayao Miyazaki (of "My Neighbor Totoro" fame), and he executive produced several of Miyazaki's films for their U.S. releases and oversaw the dubbing and translations of the English language soundtracks. From 2005 to 2014, Lasseter served on the Academy of Motion Picture Arts and Sciences board of governors, and first vice president was the last position he held before leaving due to term limits. After John left Disney at the end of 2018, he was hired by Skydance Animation, and in April 2020, famed composer Alan Menken (known for Disney films such as "The Little Mermaid" and "Beauty and the Beast") announced that he was collaborating with Lasseter on a project for Skydance. Besides his work as an animator, director, and producer, Lasseter also has more than 20 writing credits to his name, including "story by" credits on all four "Toy Story" films as well as "A Bug's Life," "Cars," and "Cars 2."

John married Nancy Ann Tague in 1988, three years after meeting her at a  San Francisco computer graphics conference. They are parents to sons Sam, Paul, Jackson, Bennett, and Joey, and their oldest son is Nancy's child from a previous relationship. Since 2002, the couple has owned the Lasseter Family Winery, which is located in Glen Ellen, California. John collects Hawaiian shirts and owns more than 1,000 of them; he also has a collection of classic cars, including a 1952 Jaguar XK120. In May 2009, he gave the commencement address at Pepperdine University and received an honorary doctorate from the school. John and Nancy's son Sam was diagnosed with diabetes as a child, and they have raised hundreds of thousands of dollars for the Juvenile Diabetes Research Foundation.

Lasseter has been nominated for seven Academy Awards, winning Best Short Film, Animated for "Tin Toy" in 1989 and a Special Achievement Award for "Toy Story." His other nominations were for Best Short Film, Animated for "Luxo Jr." (1987), Best Writing, Screenplay Written Directly for the Screen for "Toy Story" (1996), Best Animated Feature for "Monsters, Inc." (2002), Best Animated Feature Film of the Year for "Cars" (2007), and Best Writing, Adapted Screenplay for "Toy Story 3" (2011). John won Primetime Emmys for Outstanding Animated Program for "Prep & Landing" (2010) and Outstanding Short-Format Animated Program for "Prep & Landing Stocking Stuffer: Operation: Secret Santa" (2011). He received a Lifetime Achievement Award in Motion Pictures from the PGA Awards in 2010, and the organization gave him a Vanguard Award in 2002.