John Derek net worth: John Derek was an American actor, director, and photographer who had a net worth of $5 million. John Derek was born in Hollywood, California in August 1926 and passed away in May 1998. He served in the United States Army during World War II and then approached Humphrey Bogart who cast him in the 1949 film Knock on Any Door. Derek starred as Ben Travis in the television series Frontier Circus from 1961 to 1962. He starred in the movies All the King's Men, Rogues of Sherwood Forest, Mask of the Avenger, Saturday's Hero, The Family Secret, Scandal Sheet, Thunderbirds, Prince of Pirates, Ambush at Tomahawk Gap, The Last Posse, Mission Over Korea, Sea of Lost Ships, The Outcast, The Adventures of Hajji Baba, Prince of Players, An Annapolis Story, Run for Cover, The Leather Saint, The Ten Commandments, Pirate of the Half Moon, Fury at Showdown, The Flesh Is Weak, Omar Khayyam, High Hell, Prisoner of the Volga, Exodus, Nightmare in the Sun, and Once Before I Die. Derek directed the movies Nightmare in the Sun, Once Before I Die, A Boy…a Girl, Childish Films, Love You, Fantasies, Tarzan, the Ape Man, Bolero, and Ghosts Can't Do It. In 1960 he was awarded a star on the Hollywood Walk of Fame at 6531 Hollywood Blvd. John was known for marrying starlets Pati Behrs, Ursula Andress, Linda Evans, and Bo Derek. John Derek passed away from cardiovascular disease on May 22, 1998 at 71 years old. 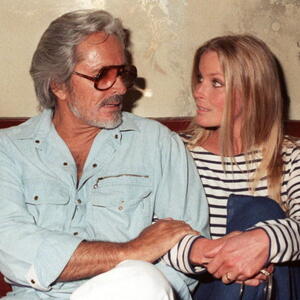