John Carpenter Net Worth: John Carpenter is an American film director, screenwriter, producer, editor, and composer who has a net worth of $40 million dollars. Carpenter is best-known for directing cult classics like "Halloween" (1978), "The Thing" (1982), and "Big Trouble in Little China" (1986), and he composed the music for most of his films. John released his first film, "Dark Star," in 1974, and the film's high quality, which was achieved on a shoestring budget, caught Hollywood's attention. His next film, 1976's "Assault on Precinct 13," was a hit in Europe but took longer to catch on in the U.S. Carpenter's third film, "Halloween," would finally establish him as a director/editor/composer of note. The film was made for $320,000 and grossed over $65 million at the box office. Throughout the late 1970s and 1980s, he wrote and directed a string of horror, science-fiction, and thriller hits, including "The Fog" (1980), "Escape from New York" (1981), "Christine" (1983), and "Starman" (1984). John has directed 18 feature films, and in 2019, the French Directors' Guild honored him with a Golden Coach Award (Carrosse d'Or) at the Cannes Film Festival.

Early Life: John Carpenter was born John Howard Carpenter on January 16, 1948, in Carthage, New York. He grew up in Bowling Green, Kentucky, with mother Milton Jean and father Howard (a music professor), and he became interested in movies at a young age, especially Westerns, horror films, and science-fiction. In 1962, John began making short horror movies with 8 mm film, and after graduating from high school, he enrolled at Western Kentucky University, where his father was head of the music department. Carpenter transferred to the University of Southern California in 1968 and studied at the School of Cinematic Arts. During his second year of film school, John co-wrote, edited, and composed the score for the short film "The Resurrection of Broncho Billy." The film went on to win the Oscar for Best Live-Action Short Subject in 1970, and it won a CINE Golden Eagle for Student Film at the 1971 CINE Competition. Carpenter dropped out of college to work on his first feature film.

Career: In 1974, John directed and co-wrote his first feature film, "Dark Star," which he reportedly made for just $60,000; he also did the musical score and produced the film. He followed it with 1976's "Assault on Precinct 13," which he wrote, directed, edited, and scored. Carpenter then wrote and directed the 1978 television film "Someone's Watching Me!," and that year, his spec script, "Eyes," was adapted into the film "Eyes of Laura Mars." "Halloween" was released on October 25, 1978, and it remains one of the most popular slasher films in movie history. The film, which John co-wrote, directed, and scored, has led to 10 more "Halloween" films, with two more, "Halloween Kills" and "Halloween Ends," in the works. In 2006, "Halloween" was preserved in the Library of Congress's United States National Film Registry for being "culturally, historically, or aesthetically significant."

In 1979, Carpenter directed the TV movie "Elvis," which starred Kurt Russell, who would become a frequent collaborator of John's. Carpenter's next film was 1980's "The Fog, a supernatural horror movie that reunited him with "Halloween" star Jamie Lee Curtis and also starred her mother, Janet Leigh. The following year, he worked with Russell again in the science-fiction action film "Escape from New York," and they would also team up for 1982's "The Thing" and 1986's "Big Trouble in Little China." John directed the 1983 adaptation of Stephen King's "Christine" and the 1984 alien film "Starman," then he briefly returned to low-budget filmmaking with 1987's "Prince of Darkness" and 1988's "They Live." Carpenter then directed Chevy Chase and Daryl Hannah in "Memoirs of an Invisible Man" and was involved in the 1993 television anthology film "Body Bags" as a director and actor.

Personal Life: John began a relationship with actress Adrienne Barbeau after meeting on the set of "Someone's Watching Me!," and they wed on January 1, 1979. During the marriage, Adrienne appeared in "Escape from New York" and "The Fog." Before divorcing in 1984, Carpenter and Barbeau had a son, John (better known as Cody), who was born on May 7, 1984. On December 1, 1990, John married Sandy King, who has worked on his films first as a script supervisor, then as a producer. Carpenter has said that his son got him interested in video games, and two often played "Sonic the Hedgehog" together during Cody's youth. John also enjoys "God of War," "Dishonored," and "Assassin's Creed III," and he has attended the Electronic Entertainment Expo with Cody. Carpenter has a commercial pilot's license and enjoys flying rotorcraft-helicopters; he has featured helicopters in many of his films, often giving himself a cameo as a pilot. In the mid-1970s, John was in band, The Coupe de Villes, with Nick Castle and Tommy Lee Wallace, who both also became directors.

Awards and Honors: In 1996, the Academy of Science Fiction, Fantasy & Horror Films honored Carpenter with the George Pal Memorial Award, and he won Best Special Effects for "Dark Star" in 1976 and Best Music for "Vampires" in 1999. He received a Lifetime Achievement Award at the 2008 Bram Stoker Awards and the 2011 Louisville Fright Night Film Fest and the Career – Honorary Award at the 2017 CinEuphoria Awards. John won the Avoriaz Fantastic Film Festival's Critics Award for "Halloween," "The Fog," and "Prince of Darkness," and he earned a Fantasporto Critics' Award for "In the Mouth of Madness." He has also won awards from the Brooklyn Horror Film Festival (Best Score – Short Film for "The Puppet Man"), CableACE Awards (Writing a Movie or Miniseries for "El Diablo"), "Fangoria" Chainsaw Awards (Best Score for "Vampires"), Fright Meter Awards (Best Score for "Halloween"), and the Los Angeles Film Critics Association Awards (New Generation Award for "Halloween"). Carpenter was inducted into the Online Film & Television Association Hall of Fame in 2020. 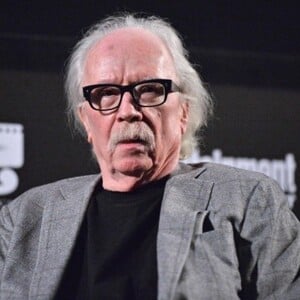