Joe Swanberg net worth: Joe Swanberg is an American film director, producer, writer, and actor who has a net worth of $250 thousand. Joe Swanberg was born in Detroit, Michigan in August 1981. He is known for his drama films with micro budgets and his use of improvisation. He is a major player in the mumblecore film movement and the themes of his movies often focus on technology, sex, and the filmmaking process.

For most of his films Swanberg has acted as director, producer, writer, and editor as well as cinematographer. His feature films include Kissing on the Mouth, LOL, Hannah takes the Stairs, Nights and Weekends, Alexander the Last, Uncle Kent, Silver Bullets, Art History, The Zone, Autoerotic, Caitlin Plays Herself, V/H/S, Marriage Material, All the Light in the Sky, Drinking Buddies, 24 Exposures, Happy Christmas, Queen of Earth, and Digging for Fire. As an actor he has appeared in most of his own films and has starred in other movies including Thou Wast Mild and Lovely, Proxy, The Sacrament, White Reindeer, and You're Next. In 2013 he won Best Film at the Vail Film Festival for Drinking Buddies. 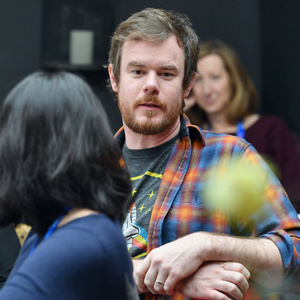