Hayao Miyazaki Net Worth: Hayao Miyazaki is a Japanese film director, animator, artist, illustrator, producer, and screenwriter who has a net worth of $50 million. Hayao Miyazaki was born in Bunkyo, Tokyo, Japan in January 1941. He is an acclaimed maker of anime feature films. Hayao co-founded Studio Ghibli with Isao Takahata.

He has been compared to Walt Disney, Nick Park, and Steven Spielberg. He started his career by joining Toei Animation in 1963. Hayao was an in-between artist for Gulliver's Travels Beyond the Moon. His first feature film was 1979's Lupin III: The Castle of Cagliostro. He had success with his 1984 film Nausicaa of the Valley of the Wind. Hayao was very popular in Japan but found worldwide success with 1997's Princess Mononoke. The film became the first animated movie to win the Picture of the Year at the Japanese Academy Awards. His 2001 film Spirited Away won Picture of the Year again and was also the first anime film to win an American Academy Award. Princess Mononoke became the highest grossing film in Japan but was passed by Titanic. Titanic was then passed by Spirited Away in 2001. Hayao married Akemi Ota in 1965 and has two children. He has claimed he was retiring many times but said he was "quite serious" in late 2013. 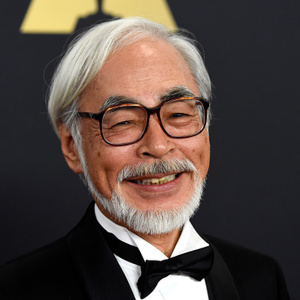