George A Romero Net Worth

in Richest Celebrities › Directors
George A Romero Net Worth:
$35 Million

George A. Romero net worth: George A. Romero was an American film director and producer who had a net worth of $35 million. George A. Romero was born on February 4, 1940 in the Bronx, New York City. His career began in Pittsburgh, his adopted home after he attended Carnegie Mellon University. He graduated from the school's College of Fine Arts in 1960 then went on to direct commercials and episodes of Mr. Rogers' Neighborhood.

George is most notable for reviving the zombie film genre. His 1968 movie "Night of the Living Dead" would inspire generations of future film makers and dozens of zombie knockoffs. That movie, with an often imitated but never completely recaptured blend of art and schlock, has gone on to be considered one of the most influential horror movies ever made, completely changing the genre forever. It was originally released in black and white and then was eventually colorized. He followed up Night of the Living Dead with not only sequels to his Living Dead series (which continues to this day), but other horror movies and at least one romantic comedy entitled There's Always Vanilla. Romero's most notable work continues to be his Dead series, which now includes 6 entries. George A. Romero died on July 16, 2017 in Toronto, at the age of 77 after a brief battle with lung cancer. 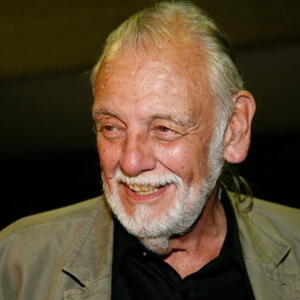