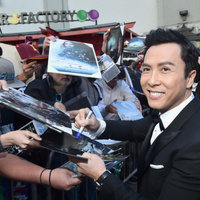 Donnie Yen Net Worth: Donnie Yen is a Chinese actor, martial artist, director, and choreographer who has a net worth of $40 million. Also known as Yen Ji-dan, Donnie Yen was born in Guangzhou, Guangdong, China, in 1963. He lived in Hong Kong and Boston, Massachusetts, as a child. He started taking up martial artists when he was a kid and dropped out of school when he was 14 to focus on wushu. Yen's parents sent him to Beijing to train in the art. His early forays into the entertainment industry were mostly as a stuntman before he landed his first acting role in "Drunken Tai Chi" in 1984. His breakthrough appearance came in 1992's "Once Upon a Time in China 11" as General Nap-Ian. He has since acted in "Iron Monkey", the Oscar-nominated movie "Hero", "Fist of Fury", "Legend of the First: The Return of Chen Zhen", "Shanghai Knights", and "Blade II". He made his directorial debut with 1997's "Legend of the Wolf" and soon started choreographing fights for films. He's considered to be at the forefront of popularizing Wing Chun martial artists, which were displayed in 2008's "Ip Man". Yen is one of the most recognizable action stars in Hong Kong and one of the highest-paid actors in Asia. He has won several choreography awards for movies such as "The Twins Effect", "Kill Zone", "Dragon Tiger Gate", and "Flash Point". As a mixed martial artist, Yen has earned his purple belt in Brazilian Jiu-Jitsu, his black belt in Judo, and a sixth-degree black belt in Taekwondo. He has been married to his second wife, Cecilia Cissy Wang, since 2003, and has three children.