David Dhawan Net Worth: David Dhawan is an Indian film director who has a net worth of $20 million. David Dhawan was born August 16, 1955 in Agartala, India. Dhawan started off as an editor before moving to directing and specializes in directing comedy films. His biggest success to date is 1993's Aankhen, starring Govinda and Chunkey Pandey.

His Partner (2007) also became a big success at the box office. Dhawan is on the board of Asian Academy of Film & Television and Asian School of Media Studies where he was also honoured with an Academy Award by Sandeep Marwah. He was a judge on the Star Plus show Nach Baliye 3 in 2008 and on the show Hans Baliye. Dhawan first teamed up with actor Govinda for the film Taaqatwar (1989). He then formed a collaboration with Govinda and went onto direct 17 movies with him as the leading actor, most of which were comedy films. Films made during their collaboration include Taaqatwar (1989), Swarg (1990), Shola Aur Shabnam (1992), Aankhen (1993), Raja Babu (1994), Coolie No. 1 (1995), Saajan Chale Sasural (1996), Banarasi Babu (1997), Deewana Mastana (1997), Hero No. 1 (1997), Bade Miyan Chote Miyan (1998), Haseena Maan Jaayegi (1999), Kunwara (2000), Jodi No.1 (2001), Ek Aur Ek Gyarah (2003), Partner (2007) and Do Knot Disturb (2009). That same year, Salman Khan invited Dhawan and Govinda on his show 10 Ka Dum to celebrate their film Partner. Dhawan got back to the trio of Govinda, Vashu Bhagnani and himself with the film Do Knot Disturb. Dhawan is married to Karuna (née Chopra)and has two children, Rohit Dhawan and Varun Dhawan. Dhawan's brother is actor Anil Dhawan. 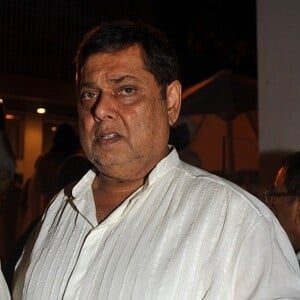