Cecil B. DeMille Net Worth

in Richest Celebrities › Directors
Cecil B. DeMille Net Worth:
$50 Million

Cecil B. DeMille Net Worth: Cecil B. DeMille was an American film director and producer who had a net worth equal to $50 million at the time of his death after adjusting for inflation. In roughly five decades, Cecil made 70 feature films spanning the silent era in the mid 1910s to the sound era through late 1950s.

Cecil B. DeMille was born in Ashfield, Massachusetts on August 12, 1881. He passed away on January 21, 1959. He started off as a stage actor in 1900. His debut silent film The Squaw Man in 1914 was credited with putting Hollywood on the map. DeMille directed The Ten Commandments in 1923 which held the Paramount revenue record for 25 years.

His 1934 film Cleopatra was his first to be nominated for the Academy Award for best Picture. He had great success with Samson and Delilah in 1949 and was nominated for the Academy Award for Best Director first for The Greatest Show on Earth in 1952. The film also won the Academy Award for Best Picture. DeMille's final film The Ten Commandments also is the 7th highest grossing film of all time (adjusted for inflation). DeMille received an Academy Honorary Award, a Palme d'Or, a DGA Award for Lifetime Achievement, and an Irving G. Thalberg Memorial Award. DeMille was the first recipient of the Golden Globe Cecil B. DeMille Award. DeMille also won two Golden Globes and was awarded two stars on the Hollywood Walk of Fame in 1960.

Cecil B. DeMille passed away on January 21, 1959 at 77 years old. According to the terms of his will, Cecil left his lavish LA mansion and the majority of his other assets to his one biological daughter, Cecilia, cutting off three adopted children. His surviving wife lived at the mansion for the next year until she died as well. His adopted children were reportedly stunned to learn that they were cut out of his will. Cecil apparently did not treat them differently than his daughter in life.

In June 2017 Angelina Jolie paid a neighborhood-record $24.5 million for the 2-acre, 11-bedroom estate. The mansion was built in 1913 and acquired by DeMille a few years later for $58,000. That is the same as $1.4 million today after adjusting for inflation. The house traded hands a few times between his death in 1959 and Angelina in 2017. 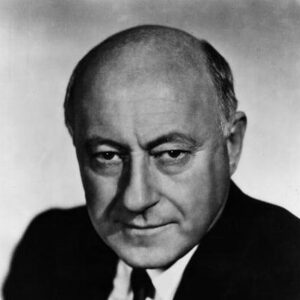