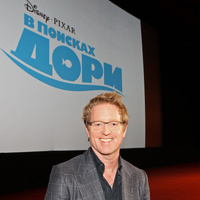 Andrew Stanton Net Worth: Andrew Stanton is an American film director, screenwriter, producer, and voice actor who has a net worth of $40 million. Andrew Stanton was born in Rockport, Massachusetts in December 1965. Stanton is based at Pixar Animation Studios. His debut came in 1987 when he directed, wrote, and voice acted in the short A Story and wrote for the TV series Mighty Mouse: The New Adventures. Stanton has also worked as a director, writer, executive producer, or voice actor on the movies Toy Story, A Bug's Life, Toy Story 2, Buzz Lightyear of Star Command: The Adventure Begins, Monsters, Inc., Finding Nemo, Exploring the Reef, The Incredibles, Cars, Ratatouille, WALL-E, Up, Toy Story 3, John Carter, Brave, and Monsters University. He is scheduled to Finding Dory in 2016. Stanton has also provided voice work for many video games. He has won two Academy Awards for Best Nominated Feature and was also nominated for Academy Awards for Best Original Screenplay for Finding Nemo, WALL-E, and Toy Story. Stanton was nominated for an Academy Award for Best Adapted Screenplay for Toy Story 3.